The pair will represent SA in volleyball at the Commonwealth Games 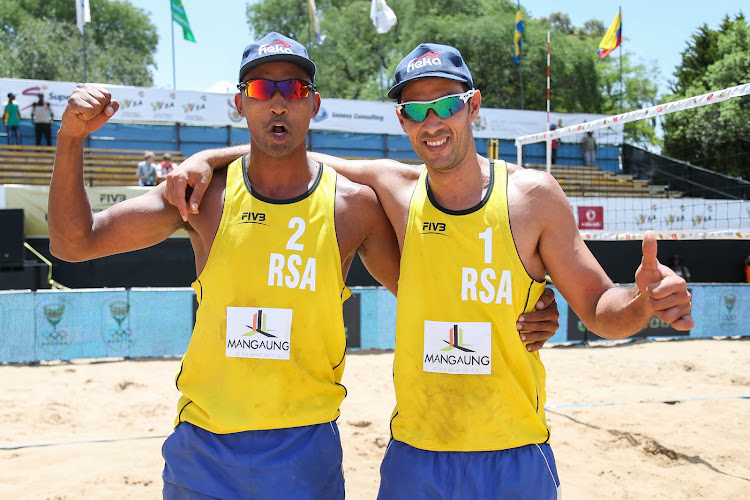 Juggling is very much part and parcel of the skills of any beach volleyball player worth their salt. And that’s not only true when it comes to the sporting side of things, as Leo Williams and Grant Goldschmidt demonstrate while preparing to represent Team SA at the Commonwealth Games in Birmingham later in 2022.

The Cape Town-born duo will be the first beach volleyball pair to represent SA at the Games after the code made its debut four years ago at Gold Coast, Australia.

It’s fair to say that both have been around the block and back a few times. They bring a wealth of experience to the court and were already part of the SA team’s qualifying build-up to the London Olympics in 2012. Only Goldschmidt made the final cut on that occasion and went on to be partnered with Freedom Chiya.

Juggling is second nature to Williams, raised in Lentegeur, Mitchells Plain. “On the way to getting an economics degree, I was involved in at least five sports, from primary school to the end of my university years. But volleyball and beach volleyball only started in my last years of high school and then university.

“While studying I was also working as a waiter at Spur for five years or so and decided to focus on indoor volleyball in my final year of university.”

Volleyball opened new vistas for young Williams and he went to the World Student Games in Serbia and Thailand in 2007 and 2009 respectively before being selected for the national side. He initially branched into beach volleyball to develop his indoor skills.

“The game got to me very quickly because all of a sudden I was more involved in the game, touching the ball almost every time ... I really loved it and could play for hours on end — even nine-to-five on weekends.”

Williams and Goldschmidt’s sporting paths started crossing and uncrossing in 2009 already and together they fought many battles on the European circuit before the latter was forced to concentrate on work, family and personal development.

The split also brought personal development for Williams, though. “I soldiered on with various different partners on the international tour as well as African tours but our results were not any better as we were not preparing together for the bigger events.

“I then met a pretty, young beach volleyball player, Martina Bonnerova, from Czech Republic and all we could talk about was living together and moving to Europe as we’d been doing long-distance for some time. I made the move to Europe in 2018 after traveling there quite a few times, and settled in Prague, with Martina, later to be my wife.”

Goldschmidt and Williams’ ticket to Birmingham came at the final qualifying tournament in Ghana. “Gambia and Rwanda had already qualified so the fight was between SA, Nigeria, Ghana and Kenya. Kenya beat Nigeria and Ghana beat Rwanda which meant we would play Kenya and Gambia would play Ghana in the semifinals. We beat Kenya in a hard-fought clash in the semifinals and as soon as Gambia beat Ghana, it meant we qualified for the Commonwealth Games!

“We still played the finals and lost in extremely windy conditions but we didn’t really care all that much as the job was done and we had booked our tickets to Birmingham.”

Back in Cape Town, “veteran” Goldschmidt, 39, heads up academics at the ETA College in Rondebosch where he also lectures on coaching and sports conditioning.

For him, volleyball was literally an escape route. “When I started Grade 8 at Princeton High in Mitchells Plain I didn’t fancy being ‘initiated’ by the matrics,” he laughs. “So before school and during interval I joined a group of guys who were just knocking a ball around and learnt that I could ‘hide’ that way,” says the former schoolboy. He is no shrinking violet, though, standing tall at 1.95m and weighing in at 85kg these days.

One thing led to another and he now has four All Africa Games and three World Student Games under his belt, apart from the 2012 Olympics.

On co-ordinating across the continental divide, Goldschmidt has no concerns. “We’ve known each other for years and have been playing together for eight years, which is invaluable. We know each other’s game inside out and are also good mates off-court. We hold each other accountable on a weekly basis and our goal is definitely to end up with a medal in Birmingham.”

Business-wise, Williams chanced his arm at solar energy project development and sales and was later drawn in by his current employer, Photon Energy in Prague.

“I still have a great work-life balance as I’m able to work and play at a decent level and what made things even better was that at the end of last year I managed to convince our leaders to enter the SA market to benefit my own country by bringing foreign direct investment to our own energy sector.”

It would seem that wherever they go, these two long-serving sportsmen will be leaving lasting footprints in both a sporting and business sense of the word.