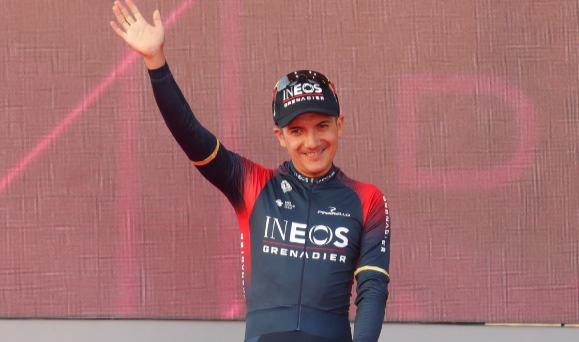 Ineos Grenadiers are the favourites to continue their Giro d’Italia domination when Richard Carapaz spearheads the British cycling team on the first grand tour of the season, which starts on Friday.

The Ecuadorian rider, who won the race in 2019 while at Movistar, leads a handful of favourites in what is expected to be a tight contest in the absence of Tour de France champion Tadej Pogacar and his fellow Slovenian Primoz Roglic.

Both are focusing on the July Tour while the last two Giro champions, Egan Bernal and Tao Geoghegan Hart, are recovering from injury and illness respectively.

Ineos Grenadiers, however, have enough strength in depth to mount a solid challenge in a race that will start in Budapest two years after the Grande Partenza from Hungary was postponed amid the Covid-19 pandemic.

The team have won three of the last four editions.

Since his 2019 triumph, Carapaz has finished second in the Spanish Vuelta in 2020 and third on the 2021 Tour de France before winning the Olympic road race in Tokyo in 2021.

Among the other favourites are Britain’s Simon Yates, who in 2018 crashed in spectacular fashion when he seemed to have a firm grip on the race, plus France’s Romain Bardet, who won the Tour of the Alps, and Spain’s Mikel Landa.

Portuguese Joao Almeida, fourth in 2020, will also be a force to be reckoned with, along with Colombia’s Miguel Angel Lopez and Australian Jai Hindley.

The pure climbers will be relieved that the amount of time-trialling — 26km — will be the lowest in 60 years, giving riders such as Lopez and Bardet better chances.

“It’s a challenge I’ve set myself this year, to compete in two big competitions and try to win both. I think it will be a great challenge for me,” Carapaz, who is also expected to take part in the Vuelta, told a news conference. He has not raced since March as he stayed in Ecuador to fine-tune his preparations at altitude.

Two previous winners, Dutchman Tom Dumoulin and Vincenzo Nibali of Italy, will be at the start of the race, which will head to Sicily before some gruelling mountain stages in the north and a finale in Verona, but both men have limited ambitions.

Dumoulin is back to full-time racing after a five-month hiatus last season and he has yet to regain his best level, while Nibali has not finished on a grand tour podium since his second place at the 2019 Giro.

On the flat stages, all eyes will be on sprinter Mark Cavendish and one-day race specialist Mathieu van der Poel.