LJ van Zyl and Wenda Nel, 16 titles between them, talk about their sport, youngsters and dual careers 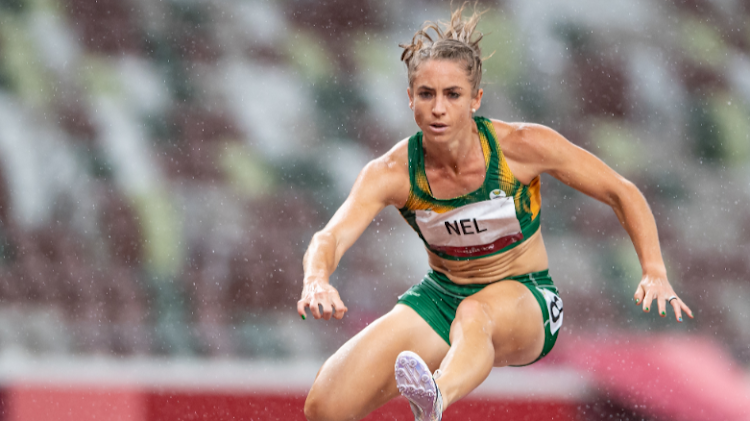 Apart from the crowning of 400m hurdles champs Zeney van der Walt and “Soks” Zazini, there were also comical scenes in the 110m hurdles when the barriers were completely misplaced before the race.

Down on the track, the first lady of SA hurdling, Wenda Nel, was saying goodbye to national championships — as she only just failed to make it an incredible 10th SA 400m hurdles title.

So with the changing of the hurdles guard well and truly under way, who better than Van Zyl and Nel to advise the next generation of the hurdles that lie in wait? After all, between the two of them they have no fewer than 16 national 400m hurdles titles.

Van Zyl, married to fellow Olympian and long-distance runner Irvette, is already hard at work ploughing back into the sport.

“I’m at the faculty of education at Tukkies and teach the higher certificate in sports sciences students with subjects like exercise science, coaching professionalism, etc, and I’m also the practical co-ordinator in the same field.”

Many of the athletes at nationals are passing through his classes — and Commonwealth and Olympic gold medal-winning swimmer Tatjana Schoenmaker also ranks among his students.

“A classic example of looking ahead is Jovan van Vuuren, national long jump champ. He’s doing his study on the education of long jump but also using it outside of actual sport and in plotting a career path.”

And Van Zyl hammers on at just how important a topic is dual-career perceptions. “I’m passionate about athletes making sure they have a dual career and not just sport.

“Some athletes just don’t get it, but I know how hard it is. I went to three Olympics, but at the same time I managed to complete four degrees. It’s flipping hard.

“But in this phase of my life I’m trying to find out what universities are doing to help, in terms of student advisers, tutors … that’s the story of my life right now. So many athletes don’t study while they are competing. Life after sport is rough, a huge adaptation.”

And leading a balanced life is just as important. “Studying while competing is actually good for your athletics. One gets mentally drained if you just do sport. I’ve told Jovan, who is one of my assistant teachers now, that he must take his books while he’s away, do his research, et cetera. Everything in life boils down to education or lack thereof.”

But it’s important to have that balance and Van Zyl has plenty to keep himself busy after his daily teaching duties are over. “It’s hectic with our two boys, Louis [6] and Gideon [4]. Louis loves swimming and Gideon is skinny like his mom and just loves running.”

Thankfully, the boys have parents who know what they’re talking about: “We don’t coach them at all and I certainly won’t coach them till at least halfway through high school. I think it’s vitally important that they do sport because they want to.

“Winning is not everything, they mustn’t feel any pressure — sport can be very cruel. Rather let them learn multiple skills, as many as they can, when they’re kids — specialising comes at a later age.”

For him, though, the reverse is true, as he now dabbles in mountain-bike racing. Oh, and he and Irvette are huge Formula One racing fans as well as food-crazy and can speak for hours about its preparation.

As for Nel, her 12-year career has left her with so many memories she simply wouldn’t change. “Hindsight is the perfect science and while sometimes I think if I had changed something I may have broken another record … I’m just hugely thankful for the places I’ve got to, the people I’ve met.

“And athletes must be grateful for challenges, they often provide unique opportunities.”

Like Van Zyl, she managed to combine competition and education. “I’m a registered dietician so can put back into the sport that way, but I also love working with the youngsters and can learn from them as well. I often look at the kids and think: ‘Wow, imagine if I had been doing that when I was their age’,” she says with a laugh.

And the two champions speak from the same page when it comes to dual careers. “From day one, planning is so important, you have to think beyond athletics. If I could tell the youngsters anything, it would be to never think you’re bigger than the sport. Winning and medals are lovely things, but that can all be taken away at the drop of a hat by injury or illness.”

For now, Nel has to focus on being professional for just a few more months. “I want to try and qualify for the world championships and the Commonwealth Games —my best athletics memories were the build-up to my bronze medal at Gold Coast in 2018 — and a final few races in Europe.

“But once I’m done I’ll let reality kick in. It’s not going to be easy, but I really want to give myself a bit of time. I also think it’ll be precious to start a family, but nothing’s set in stone right now.”

So while hurdles queen Nel stays on track for one final hurrah at the Comm Games in Birmingham, the hurdles king finds his path going off the beaten track to overcome new challenges in the bike saddle.