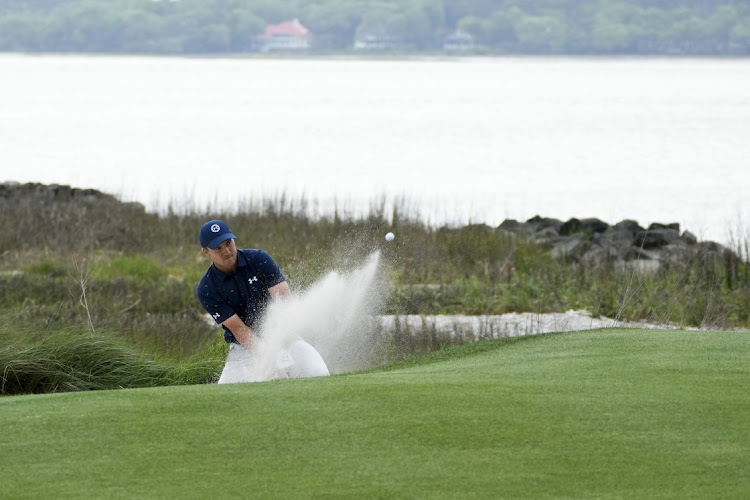 Jordan Spieth hits from the bunker on the first playoff hole after the final round of the RBC Heritage tournament at Hilton Head, South Carolina, on Sunday. Picture: DAVID YEAZELL/USATODAY SPORTS

Jordan Spieth overcame “the worst feeling” of his career to triumph at RBC Heritage tournament in South Carolina on Sunday, less than two weeks after missing the cut for the first time at Augusta National.

The 2015 Masters champion beat Patrick Cantlay with par on the first playoff hole, recovering from a tiny putt flub a day earlier at Hilton Head Island and leaving with his 13th PGA Tour title.

The three-times Major winner said he rolled into the tournament with his frustration level at an all-time high after producing the worst showing of his career at the Masters recently.

“I’ve been hitting the ball really, really well all spring, better than I did last year, and I just haven’t been scoring. So I put in a lot of hours on the putting green this week, and to be honest, if it helped incrementally, it was just enough.”

The win marked sweet redemption for Spieth, who bogeyed on the final hole on Saturday after missing a putt officially measured at just 18 inches.

“Obviously very happy to be in this position,” he told reporters. “What a great tournament to win.”

The victory on Sunday came after Spieth shot a five-under 66 that featured two eagles on the front nine and a birdie at his 72nd hole at Harbour Town Golf Links, which pushed him to a 13-under 271 while several groups behind him were still on the course.

So Spieth waited. “I was inside, and I can’t stand watching golf when you’re trying to dodge made putts because these guys are so good,” said Spieth, who started the day three shots off the pace. “Every single putt looks like it’s going in. It was just way more nerve-racking than actually playing.”

The only man to match him was Cantlay, the reigning FedExCup champion. Cantlay sank a nine-foot birdie putt at the par-three 17th to reach 13 under and missed a birdie try at the par-four 18th, adding up to a final-round 68.

Spieth and Cantlay replayed the 18th, and both landed in a green-front bunker on their second shots. But Spieth stuck his sand shot seven inches from the cup for a tap-in par, while Cantlay had a plugged ball and hit his shot to the far end of the green before failing to save par.

“Same number as in regulation and hit a similar shot with the same club,” Cantlay said of his approach. “It obviously caught a different wind than what I was expecting. The wind was supposed to be off the right. If anything, a little down, and I must have caught a little burst. Obviously with it plugged like that, it’s darn near impossible to get it close.”

Seven players tied for third at 12 under, among them Harold Varner III and Ireland’s Shane Lowry, who played in the final pairing of the day.

Varner led the tournament by one shot after 54 holes, but he parred all nine holes on the back nine on Sunday and carded a one-under 70.

Lowry strung together three birdies at holes four to six and reached 14 under to hold the lead by himself for a time.

But after a wayward tee shot at the par-three 14th, his recovery attempt found the water and he made double bogey. After missing birdie putts at No 16 and 17 that would have drawn him even with Spieth, he finished with a 69.

‘It’s a great feeling to be in the winner’s circle,’ US golfer says after landing a place at one of the world’s top tournaments
Sport
1 month ago

Despite injuries, the high-aiming golfer is preparing hard with his trainer and physio for this week
Sport
2 months ago
Next Article