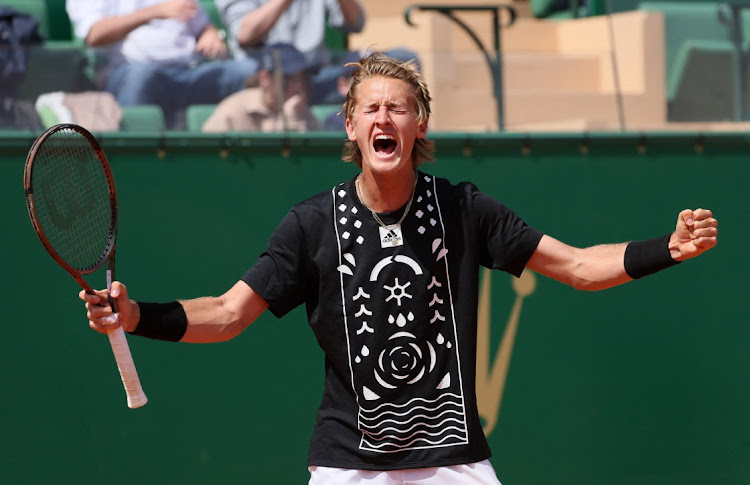 Sebastian Korda of the US celebrates winning his second round match against Spain's Carlos Alcaraz Garfia at the Monte Carlo Masters, Roquebrune-Cap-Martin on April 13 2022. Picture: REUTERS/DENIS BALIBOUSE

Unseeded American Sebastian Korda mastered the windy conditions in Monte Carlo to topple Miami Open champion Carlos Alcaraz 7-6(2) 6-7(5) 6-3 on Wednesday and advance to the last 16 of the Masters tournament.

World No 11 Alcaraz, 18, suffered his third defeat of the year in an entertaining battle with Korda that lasted just more than three hours, with both players struggling for rhythm.

The 21-year-old Korda raced to a 4-2 lead in the opening set before Alcaraz fought back and twice served for the set, but was broken both times and  outplayed in the tiebreak.

Alcaraz pinched the second set on tiebreak and forced the decider, where Korda rallied from a break down and moved 5-3 ahead before serving for the win.

“After losing to a Spaniard in Indian Wells and serving for it, it was nice to get a victory today,” said Korda, who pushed Rafa Nadal to a third-set tiebreak at the California tournament.

“I had to just stay calm and believe in my returning. Every time you’d throw up the ball, it would move around. It was super tough to serve today but I’m super happy with the way I handled myself.

“I did get a lot of good practice on my return, but I don't know what to say. It was a crazy match!”

Korda will face the winner of the tie between Indian Wells winner Taylor Fritz and Croatian Marin Cilic, which was played later on Wednesday.

World No 3 Alexander Zverev will take on Federico Delbonis while other top 10 seeds including Andrey Rublev, Casper Ruud and Felix Auger-Aliassime are also in action.

The tournament is without a number of big names, including Nadal, Daniil Medvedev, Dominic Thiem and Matteo Berrettini, while world No 1 Novak Djokovic crashed out in the second round on Tuesday.