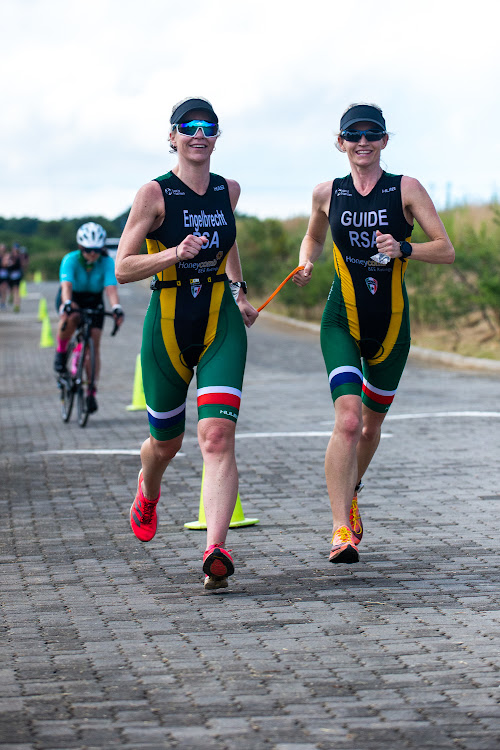 Linsay Engelbrecht and her guide Trish Heimann on the way to victory at the Central Gauteng championships in January. Picture: Willie Esterhuyzen

In 2006, aged just 23, Linsay Porter was told she would be blind by 50 and should start learning Braille.

But the search for solutions finally brought her clarity from the seventh optical expert from whom her family sought help.

The definitive diagnosis was Stargardt’s disease, a macular degenerative disease that results in progressive loss of vision, specifically central vision, but doesn’t lead to total blindness.

There followed a long spell where her mom, Jenny, moved heaven and earth to make life for Linsay as easy as she could, including specially imported spectacles and even her own Italian chauffeur to help get around in Johannesburg.

Along the way she met Deon Engelbrecht, who was to become devoted husband and father of Kaylee, Megan and Tiaan.

“Deon is sports mad, an absolute sports fundi,” says Linsay. “He and his kids really encouraged me to get into more sports-related things. I used to huff and puff 2km around Rhodes Park Dam in Kensington,” she says with a laugh.

But persevere she did, and today, a month short of her 40th birthday, she finds herself within days of knowing whether she will be part of Team SA at the Commonwealth Games in Birmingham, England.

But not in running. Despite having got herself through two gruelling Comrades Marathons, one down-run and one up-run and having improved her time by 10min on the second occasion.

Birmingham will be about para-triathlon (swimming, cycling and running) and she has already completed the three events that formed part of the complicated qualification procedure for Birmingham.

And let it be said, those two Comrades were run solo, in the sense that she had no guide with tether in tow to assist her. “I didn’t even know those things existed then — there were many falls in training and I’m sure there will still be falls, but luckily I had my running group at K-Way Jeppe Athletics Club who would shout ‘hole ahead’ and so on”

Since she has focused on triathlons, she’s also switched guides with Trish Heimann now acting as her eyes.

She also had expert guidance from 2008 Paralympian bronze cycling medallist Gavin Kilpatrick, himself gunning for a slot in Birmingham. He says: “I met Linsay in 2020 at the Dis-Chem Ride for Sight cycle race, that raises money for Retina SA, a central point for people with visual impairment. After the ride I started speaking to her and found that we had the same impairment. I told her that I’m a para-triathlete and we were trying to qualify for 2020 Tokyo Paralympics.

“Unfortunately that didn’t happen, but we kept in touch and I got her involved and ended up introducing her to a friend who owns a swimming school. And another friend is now her current guide and they race together. It’s been a two-year journey and so nice to see the visually impaired group of triathletes growing in SA and being an inspiration to so many.”

Linsay takes up the tale: “Com Games selection criteria closed on March 28 and we had to compete in three events. Our first was the African Para-Cup in Egypt in June last year where myself and original guide Laura Horne won gold. Then it was on to Portugal for the World Triathlon Cup, in my first race with Trish, and we took fifth place and the third and final race was the African Triathlon Para-Cup in Gqeberha two weeks ago when I got gold.”

To qualify, an athlete must also be among the top nine (within the Commonwealth Games countries) and she’s now ranked seventh.

Should she get selected it will be a surreal experience for her. “It’s difficult because never in my life did I think I could achieve something like this. Sure, I’ve worked so, so hard in the short time I’ve done para-sport but to reach this far….”

At the same time, she’s realistic. “I’d love to be in Birmingham, but if it’s not to be then that’s OK because my end-goal is actually the Paris Paralympics in 2024. To be part of Team SA though would be an additional eye-opener to be around other para-athletics and see what they do, how they do it, how hard-working yet humble they are ... it’s just incredible.”

When she’s not training or on family duties, Lynsay runs a family branding business with her brother, having taken over the business from her mom.

And it was her mom who played such a part in the emotional weekend last year that saw Lynsay’s highest and lowest points in her eventful life to date.

“It was in Egypt. My mom had been in hospital when I left but Deon urged me to stay focused on the race after all the training and sacrifices. I won my category on Sunday morning, met the sports minister of Egypt, and was just over the moon.

“I rushed back to the hotel to FaceTime Deon and tell him my great news and I saw there were tears in his eyes and he told me that my mom had died two days earlier so I went from highest of highs to lowest of lows in the space of a second — something I wouldn’t wish on anyone.”

For now though, Engelbrecht’s rollercoaster ride through life and sport continues. But one thing’s for sure: she’s only looking up.

Coaching is primary goal, Semenya says after another best time

Coaching is primary goal, Semenya says after another best time