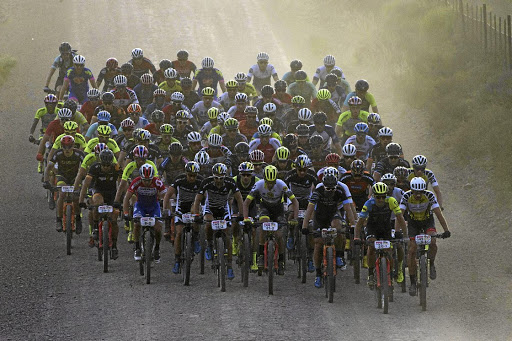 A perfect sprint and the “Pauline Ferrand-Prévot express” were the factors that decided the winners in the men’s and women’s race on the fourth stage of the Absa Cape Epic in Greyton on Thursday.

Again, two South Africans stood on the top step of the podium, as Matt Beers of SA won the stage with US partner Christopher Blevins (Toyota-NinetyOne-Specialized), while Robyn de Groot hung tough as her French superstar partner Pauline Ferrand-Prévot (BMC) put the hammer down and drag-raced the pair of them to the line for their third victory of this year’s Epic.

Ferrand-Prévot, the first person in history to be world champion in cyclocross, road racing and MTB cross-country, said she was “on fire” on a day when De Groot thought they were supposed to be taking it easy.

“I was told it was a rest day today,” said De Groot, who hung tough as the leaders of the CM.com women’s category, Sofia Gomez Villafane (Argentina) and American Haley Batten (NinetyOne-Songo-Specialized) ate into their lead as the kilometres were ticked off.

“That was an unintentional solo breakaway, but thankfully I had a ‘PFP express’ in front of me. She is such a super motiving partner, and I was just thinking out there, never mind the world championship titles, she’s just a world champion person,” said De Groot.

“Yesterday we made a mistake and today we didn’t want to do the same. We tried to go early on the single track and I thought we just had to keep pushing and to be safe on the downhill because it was quite technical and super rocky. After that we went full gas.

“Robyn did so good and I am so proud of her. I was on fire today, so I was yelling to her, and I’m so sorry, but we had to win this stage. Now we have three wins, which is super cool,” said Ferrand-Prévot.

They won the stage by a minute and wee seconds, and are second overall in the general classification, 11min behind Villafane and American Batten. South Africans Hayley Preen and Marie Rabie (Private Client Holdings) were third on the day in what is proving to be a great Epic for them, while their countrywomen, Candice Lill and Mariske Strauss (Face Rola), the leaders in the African women’s category are third overall after Lill struggled with a puncture.

Beers and Blevins pulled off a perfect sprint to beat yellow jersey holders German Andreas Seewald and Czech Martin Stosek of Canyon Northwave to take the stage, their third of the Epic.

After they had dropped Germany’s Lukas Baum and Georg Egger (Speed Company), the winners of the third stage, Beers went hard, taking Seewald with him to set up the sprint for his teammate. The first two riders from a team over the line are declared winners.

“That was perfectly executed,” said Blevins. “I wish we could say we talked about that before, but it just kind of happened. Matt rode off with Andre, then I was licking my lips a little bit — I finally got the chance to go for a sprint because that’s my strong suit. It was perfectly played and with a little bit of luck.”

“We just had to make sure that time gap was fine here at the end, but the race in general, we were both suffering a little in the beginning, but Chris did a monster turn up on the ridge line there. We made it back to the Speed Company guys, and we knew the three teams would come to the line together. What happened was pretty cool,” Beers said.

Egger said while they had felt “good in the beginning”, the others marked them on Thursday. “Lukas had a small crash and the others reacted a bit earlier today so it was not so easy for us to get away. Super crazy at the end there. We hoped that the others would go too fast on the front, so they would get over a two-minute gap. We were in an unlucky position. We couldn’t attack from the back.”

“The race is still long and we have a few more days to go, so the overall time is very important for us. It was a little unlucky that we didn’t make up some time on the yellow jersey,” said Baum.