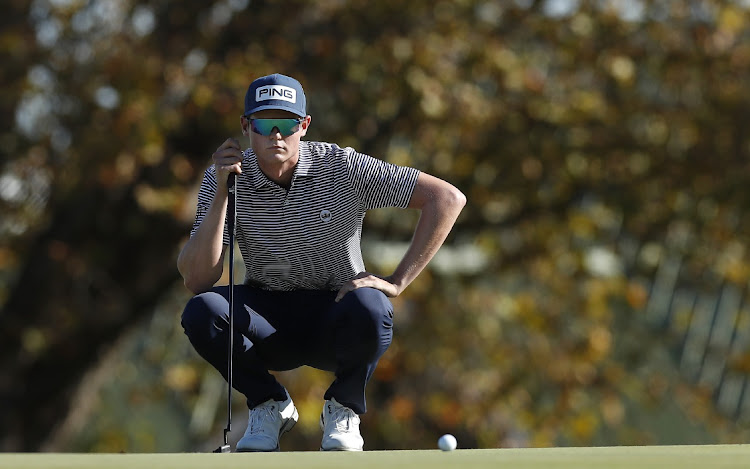 Wilco Nienaber lines up a putt on the 18th green during the final round of the Dimension Data Pro-Am at Fancourt Golf Estate in George, May 9 2021. Picture: LUKE WALKER/GETTY IMAGES

Wilco Nienaber will make the first title defence of his professional career in this week’s Dimension Data Pro-Am at Fancourt, in a tournament that marks the start of the Sunshine Tour and Challenge Tour’s run of seven (six in SA and a seventh in Tanzania) co-sanctioned events.

“I’m really excited,” said Nienaber as he returns to the scene of his breakthrough victory in the professional ranks.

“The win feels like such a long time ago. In fact, last year felt like a long year. But I’m pretty sure that as soon as I get to Fancourt I’ll relive some of those memories. Having said that, the focus is on this week and not last year. I want to win it again and not get stuck in last year.”

While Nienaber returns as the reigning champion of this historic tournament, Goosen is back as the 2002 winner and as part of a strong field also including Dean Burmester, former Sunshine Tour Order of Merit winner JC Ritchie, and six former champions of this event.

“It’s a big tournament with a lot of points on offer, so you’ve always got to make sure you’re ready for it. I’ve got a plan for the week and I’m looking forward to it,” said Nienaber.

A large part of that plan is navigating the challenge of three different courses this week — the Montagu, Outeniqua and Links — and the popular pro-am format.

“It’s important to make sure your energy levels are spot on this week. A lot of the success is about getting your preparation right, and then being patient out there. We’re fortunate to have a long run of Challenge Tour events coming up, so I’ve got a good plan in terms of my preparation and making sure I’m ready for every tournament I play in.”

This will also be the second week that Nienaber has veteran caddie Ricci Roberts on his bag. He and Roberts, the man alongside the majority of Ernie Els’s successful career, started working together at the Vodacom Origins of Golf Final at Sun City, and Nienaber said the experience he brings is invaluable.

“It kind of just happened that we started working together. There was no real reason behind it. It’s great to have his experience on the bag. I remember at Sun City, when it came to the first round of the tournament, it just felt like another practice round. He brings that experience and calm to the situation.”

Captaincy can be tough and lonely, Temba Bavuma admits

Captaincy can be tough and lonely, Temba Bavuma admits