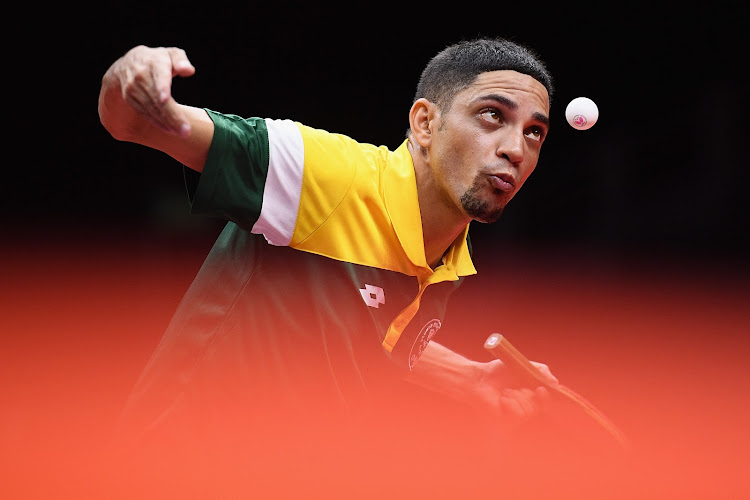 Sporting stories are littered with terms such as “hungry for success”. When it comes to sports outside the SA mainstream codes, it gets chillingly close to the bone.

Take Cape Town’s battle-hardened Theo Cogill. Table tennis has been his life for so many years, despite a near-death experience when he was stabbed while breaking up an altercation back in 2011 and had to switch an Olympic dream into a Paralympic reality.

Left with limited mobility and neural sensation after damage to his spine, the 34-year-old has gone on to represent Team SA at the 2018 Commonwealth Games in Australia and last year’s Tokyo Paralympics.

Once again he has been identified by the SA Table Tennis Board and national sports umbrella body Sascoc (SA Sports Confederation and Olympic Committee) as one of the potential players to be shortlisted should table tennis qualify to participate in the Commonwealth Games in Birmingham, England later in 2022.

When it comes to experience, Cogill has been there and done that, having travelled to about 70 countries.

One of those countries is Hungary and the irony is not lost on the Bonteheuwel-bred Cogill. “Right now, I’m not earning a single cent. Sometimes I get home and there’s nothing to eat and my parents [both in ill-health] rely on me for income as well.

“So many people think they know what it likes to go hungry but the reality is that most of them don’t,” he says with brutal honestly. “They say: ‘I know where you’re coming from, I understand’.

“They don’t, they just don’t. Thankfully I have many good people in my life who know my situation and help me here and there with piecemeal acts of kindness.”

It is not hard to see why he battles to bounce back from adversity. “I have to admit that some days I’m at the stage where I just don’t really want to play anymore. I’ve been on the table tennis scene for 22 years and the financial incentives are just not there.”

But the Commonwealth Games will still act as some motivation. “I may be 34 but I know I can get so much better, with the right support.

“The support structures from the wealthier countries in Europe and the Far East are light years apart. Going into the Tokyo Paralympics I knew of athletes who came straight from training camps and hadn’t even been home for two years.”

In his experience, Cogill says that so often talk is cheap as chips. “The closer it gets to a major event, the more the talk of gym, medical and physiotherapy being freely available, but it seldom works out and I’ll come back from training wondering if there’s anything to eat at home.”

Fortunately, the last week has seen an upturn of hope for Cogill. “I’ve been contacted with some coaching opportunities at a southern suburbs school, which will be great.”

And there may be other opportunities on the table. “I don’t want to give too many details away but there’s a good chance I may have a major role in a table tennis movie that will be shot in one of the Cape Town townships, of a boy with limited mobility overcoming adversity and reaching the national team. That sounds very promising.”

Bonteheuwel, where drugs and death could be a split-second or street-breadth away, and table tennis certainly have a close relationship.

Genevieve Lentz is another shining star of excellence in the official ranks. “I grew up in Bonteheuwel and despite the many problems there was always a great sense of community spirit, the neighbours always watched out to ensure the children in the neighbourhood were safe.

“We played a bit of league in primary and high school and then I got involved with Boundary Table Tennis Club just down the road.”

One thing led to another and Lentz qualified as an international umpire in 2006 and the world became her oyster. Ten years later she started the road to becoming the first female referee in Africa.

“Playing sports in areas like Bonteheuwel is so important ... it’s a lifeline, an alternative to hanging out on street corners and with the wrong people. It teaches kids so much, like good principles in life, how to work with teammates and so on. It’s about self-esteem and escapism and, these days, more opportunities.”

She says the opportunity of playing sport gives them something to look forward to over the weekends and bemoans the lack of physical training (PT) in the schooling system.

“PT really needs to be officially part of school from an early age. It’s about creating sporting awareness, and the need to keep fit, and eat and drink properly.

“The SA Table Tennis Board is hosting the world championships in Durban next year which is the ideal springboard for more development initiatives ... it could really be explosive in terms of attracting both funding and new talent.”

For Cogill, though, explosive has a less positive connotation. “My daughter, Jehaan, spends time between her mom and I and a while ago we were playing in a park very close to me and she came running up to me saying: ‘Daddy, daddy, we must go, we must go ... the gangs are shooting’.”

He sighs. “She only turns five in March. It’s situations like these that give me extra motivation to keep on going.”

So, as SA nets next year’s World Championship, it is pioneers such as Cogill and Lentz who dream of table tennis being the safety net for another generation of rough diamonds.