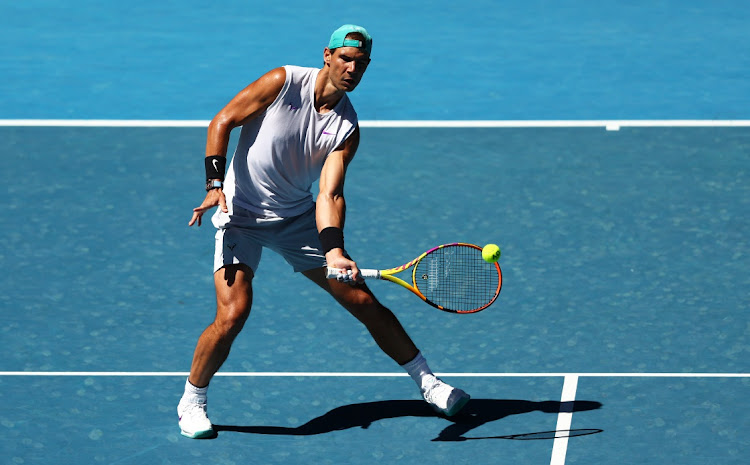 Rafael Nadal of Spain plays a forehand volley during a practice session ahead of the 2022 Australian Open at Melbourne Park in Melbourne, Australia, January 16 2022. Picture: CLIVE BRUNSKILL/GETTY IMAGES

Melbourne — A Grand Slam accustomed to the iron rule of Novak Djokovic will emerge blinking into a brave new world on Monday as rivals jostle to fill the power vacuum left by the Serbian superstar at the Australian Open.

The winner of a record nine titles at Melbourne Park, including the past three in succession, Djokovic’s hopes of continuing his dynasty and claiming a record 21st Grand Slam title lay in ruins on Sunday after he lost a court case to stay in the country.

Many Australians will be glad to be rid of an athlete who had become a hero of the anti-vaxxer movement, while players will be relieved the spotlight can shift back to tennis. But the loss of the world No 1 is a blow for a men’s tournament, which was already lacking star power after the withdrawals of Roger Federer and Dominic Thiem.

Djokovic’s exit from Australia may have major repercussions for his tennis career, particularly if he continues to snub Covid-19 vaccination. But for the players left in Melbourne, it is a golden opportunity.

None may be more pleased than sixth seed Rafa Nadal, who remains level with the Serbian and Federer on 20 Grand Slam titles. The 2009 winner and four-times finalist, Nadal is the only Australian Open champion left in the draw.

Before Sunday’s court decision, Nadal could well have met the Serb in the semifinals, a player the Spanish great has not beaten on a hard court since 2013.

Should Nadal survive a possible quarterfinal against third seed Alexander Zverev, the highest seed Nadal could meet in the semis is seventh-ranked Italian Matteo Berrettini.

Nadal will still have his work cut out, though. The leading lights of the next generation have gradually worn the Spaniard down on hard courts in recent years, and a number of them will feel their time has come in Melbourne.

Second seed Daniil Medvedev could prove a major obstacle for the Spaniard’s hopes of stealing a march in the Grand Slam title race.

Medvedev was thrashed by Djokovic in the 2021 final but the gangly Russian dynamo turned the tables on the Serb at the US Open to win his first Major title.

He would become the first player outside the Big Three of Djokovic, Nadal and Federer to win consecutive Grand Slam championships since Andre Agassi in 1999/2000.

Long marked for Grand Slam success, Zverev will feel he is due for a breakthrough, having fallen agonisingly short in his first Major final at the 2020 US Open against Thiem.

Fourth seed Stefanos Tsitsipas will be another desperate to make hay while Djokovic is away.

Tsitsipas knocked Nadal out in the quarterfinals last year to reach his second semifinal at Melbourne Park before being stopped in his tracks by Medvedev. Months later, Djokovic ruined Tsitsipas’s hopes of a maiden Slam title in the final at Roland Garros.

Murray, who has lost four Australian Open finals to his career-long rival Djokovic, said he felt for his old junior rival. "It is not great for the tournament because it is better when all of the top players are playing in the event," wildcard Murray was quoted as saying by the BBC.