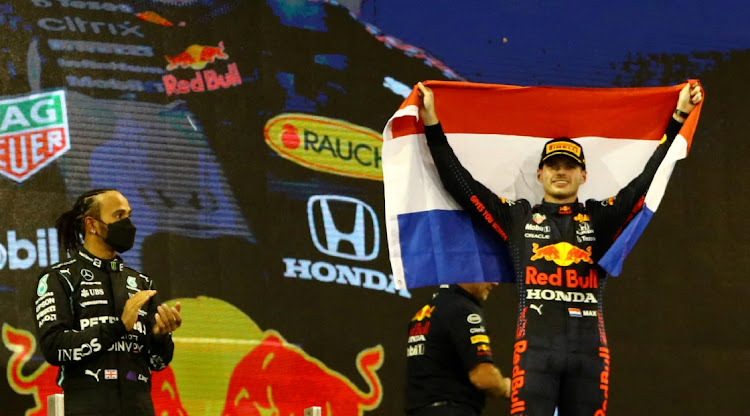 London — Max Verstappen was hailed as a future Formula One world champion even before he entered the sport as a 17-year-old rookie in 2015 and on Sunday, whooping in delight, he fulfilled his destiny in dramatic style.

The 24-year-old Dutch driver, followed around the world by a raucous army of orange-shirted fans, overtook Mercedes’ seven-time champion Lewis Hamilton on the last lap of the final race in Abu Dhabi.

“You have driven like a champion all year. You deserved that. You have made it happen and we absolutely love you.”

It looked like the end of an era, the passing of a baton even if 36-year-old Hamilton no doubt intends to take it back next year, as the rivals sportingly embraced before taking the podium.

“It’s insane, I’m so happy,” Verstappen said. “My goal when I was little was to become a Formula One driver and you hope for wins, you hope to be on the podium; when they play the national anthem you hope they play yours.

“And then when they stand here and they tell you you are the world champion it’s just something incredible. All the things come back to your mind, all of the years travelling for that goal.”

Formula One’s first Dutch world champion, though he is Belgian born, has grabbed the title by the throat this season and given Hamilton his first real, down-to-the-wire rival from outside his own team.

Verstappen has motor racing in his blood, a born racer who has been around the sport since he was a baby and was on wheels almost as soon as he could walk. Naturally talented, he is also determined and driven, a reflection of the firm hand of father and former Formula One racer Jos, while also keeping his feet on the ground.

Jos took two podiums for Benetton in 1994 as a teammate to Michael Schumacher, and the families holidayed together, but he retired without coming close to the success he felt his talent deserved and that his son has delivered.

As he progressed through karting there was only ever one destination. Verstappen has Formula One records as youngest driver, points scorer and race winner (at 18) and is the first non-Mercedes driver to take the title since Sebastian Vettel with Red Bull in 2013.

Hamilton saw the threat coming years ago. “There’s always someone waiting to take my position. I’ve got that Max just sitting there waiting to take it,” he said in 2017 after securing his fourth title.

While the two rivals have been locked in a duel for the ages, one that will go down as one of the sport’s greatest, they are poles apart. Where the Briton is involved in fashion, music and using his platform as champion and Formula One’s sole black driver to push for racial equality and diversity, Verstappen has fewer distractions.

“Favourite hobby? That’s a tricky one. Asides from Formule One, I do a lot of sim [virtual] racing. I guess that’s a hobby,” Verstappen said at the Saudi Arabian Grand Prix. “But in a way also not because I take it very seriously.”

Verstappen is also a racer who sometimes crosses a line, literally and figuratively. Hamilton said in Jeddah he felt Verstappen raced as if the rules did not apply to him but Horner said that was not the case.