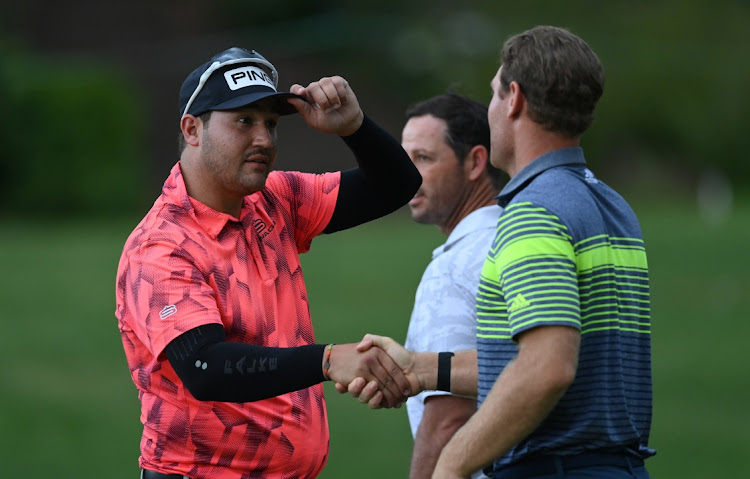 Thriston Lawrence and Lorenzo Scalise of Italy shake hands as play is suspended on the ninth hole during Day One of the Joburg Open at Randpark Golf Club on November 25, 2021 in Johannesburg. Picture: GETTY IMAGES/STUART FRANKLIN

SA’s Thriston Lawrence and Spain’s Angel Hidalgo hit the top of the Joburg Open leader board just as the weather hit the first round of this Sunshine Tour and DP World Tour co-sanctioned tournament at Randpark Golf Club on Thursday.

Lawrence was on six under par with one hole to play, while Hidalgo had made it into the clubhouse with his six-under 65 when the siren sounded at 5.05pm for dangerous weather. The first round will resume at 6:30am on Friday.

Lawrence and Hidalgo are one stroke clear of England’s Ashley Chesters, who managed to complete his first round. And PGA Tour campaigner Dylan Frittelli is two shots off the lead after his 67.

At the end of a day that began in chilly and windy conditions, Hidalgo was certainly pleased to finish off his round before play was suspended and to give himself a shot in a tournament of this magnitude and so early in the new season.

“It was a lot of fun. This was like my third DP World Tour event in three years, so I was a bit nervous early in my round. But this start means a lot to me. It gives me a lot of confidence. It’s great to be here and playing with the best, so let’s start the party,” he said.

The threat of Frittelli near the top of the leader board is a real one, with the South African more determined than ever to perform well in front of his home fans this week. So much so that he is taking a far more aggressive approach to this year’s event.

SA’s JC Ritchie scored the first hole-in-one of the new season when he aced the par-three 17th on his way to an opening round of one-over-par 72. But he was unlucky to miss out on the Jaguar that is on offer for a hole-in-one on the weekend of this tournament.