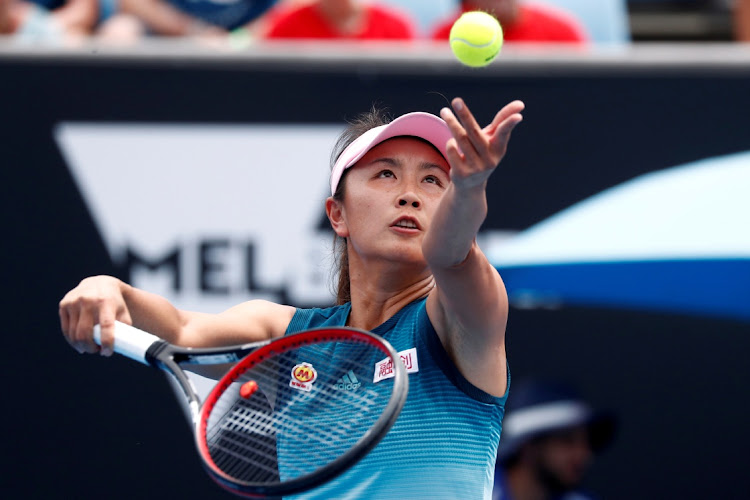 A file photo of China’s Peng Shuai serving during a match at the Australian Open on January 15 2019. Picture: REUTERS/EDGAR SU

New York — The head of the Women’s Tennis Association (WTA) on Wednesday voiced doubt over an email it received, also released by a Chinese state media outlet, in which tennis player Peng Shuai was said to deny her allegations of sexual assault.

Peng, one of China’s biggest sport stars, said on social media this month that former Chinese vice-premier Zhang Gaoli coerced her into sex and that they later had an on-off consensual relationship.

Her post was deleted about half an hour later and she has not since been seen in public or made a statement, alarming the global tennis community.

On Twitter on Wednesday, Chinese state media outlet CGTN released what it said was an email Peng had sent to WTA chair Steve Simon, who is also its CEO, in which she said the allegation of assault was untrue. Twitter is blocked in China.

“The statement released by Chinese state media concerning Peng Shuai only raises my concerns as to her safety and whereabouts,” Simon said. “I have a hard time believing that Peng Shuai actually wrote the email we received or believes what is being attributed to her.”

Beijing has yet to comment on Peng’s initial allegation, and discussion of the topic has been blocked on China’s heavily censored internet.

The statement comes as China prepares to host the Winter Olympics in Beijing in February amid calls from global rights groups and others for a boycott over its human rights record.

“My answer is very simple. This is not a foreign affairs matter, and I am not aware of the situation you mentioned,” foreign ministry spokesperson Zhao Lijian said on Thursday when asked about Peng’s whereabouts and whether China is concerned her case would affect its image ahead of the Olympics.

The Chinese Tennis Association did not immediately respond to a request for comment.

The email that CGTN attributes to Peng says: “I’m not missing, nor am I unsafe. I’ve just been resting at home and everything is fine.”

Besides CGTN, the English-language arm of state broadcaster CCTV, no other Chinese media outlet on Thursday morning in Asia had reported the letter.

A representative for Peng did not immediately respond to a request for comment.

The Florida-based WTA and its men’s counterpart, the London-based Association of Tennis Professionals (ATP), previously called on China to investigate Peng’s allegations.

Current and former players, from Naomi Osaka and Novak Djokovic to Billie Jean King, have expressed support and concern for Peng, with many top women’s players taking to social media with the hashtag #WhereIsPengShuai.

“The WTA and the rest of the world need independent and verifiable proof that she is safe,” Simon said. “I have repeatedly tried to reach her via numerous forms of communications, to no avail.”

“I hope @WTA continues to show what we stand for as players,” Jessica Pegula, a top-20 US player, said on Twitter. “We are extremely lucky to be able to do what we do but I hope more people, not just tennis players, shed some light on this deeply concerning situation.”

Foreign players need to have two shots, which may put the Serb’s Grand Slam record bid in doubt
Sport
6 months ago
Next Article