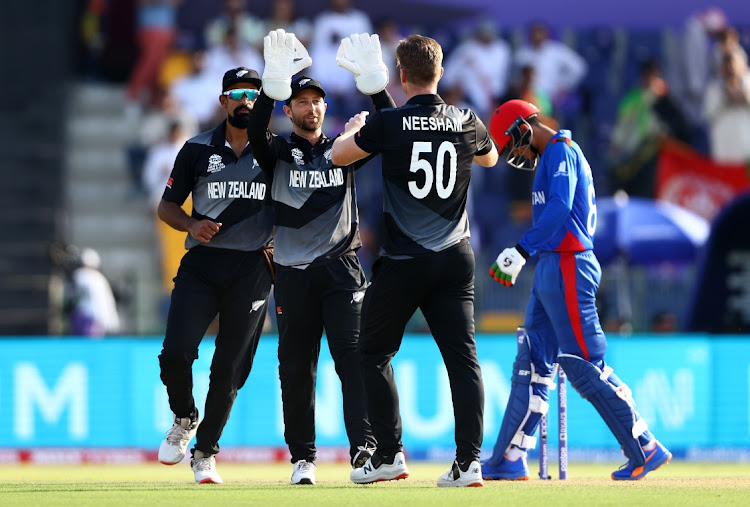 As his teammates celebrated their win over England in Wednesday’s semifinal of the T20 World Cup, New Zealand’s Jimmy Neesham did not move. His pads still on after his 11-ball 27 had turned the match, Neesham sat, arms crossed as the rest of the bench erupted.

When ESPNcricinfo tweeted the image of him sitting still with the caption, “Jimmy  Neesham did not move”, he retweeted it with the reply: “Job finished? I don’t think so.” He followed that up with a post from a 2009 press conference with Kobe Bryant, who was asked why he was not smiling now that his team were up 2-0 in the NBA Finals: Kobe: ‘What’s there to be happy about?’ Reporter: ‘You’re up 2-0.’ Kobe: ‘Job’s not finished.’ ”

Neesham is not yet done, and, you believe neither are New Zealand. He’s been here before. He was at the crease with Martin Guptill in the super over in the final of the 2019 Cricket World Cup at Lord’s. England had scored 15 in their super over dig. New Zealand needed one more than that. A tie would give it to England as they had scored more boundaries.

The first ball from Jofra Archer to Neesham is wide. The New Zealander digs the second (well, really the first) out of the blockhole for two. The third delivery is whipped over midwicket for six. They needed seven from four to win.

Deliveries four and five go for two-apiece. Three off two to win. The sixth is a single. Guptill gets the seventh away and as he tries to get back for the second, he is run out. New Zealand lose. Neesham was devastated. The world outside England sighs.

Later, when the hurt was still hard and the moment as confused, Neesham tweeted: “Kids, don’t take up sport. Take up baking or something. Die at 60 really fat and happy.”

It was Neesham’s knock that gave weight to the 72 by Daryl Mitchell, son of John Mitchell, the former Lions and Sharks coach. Mitchell worked for Eddie Jones as his defensive coach for a spell, until Jones, abrasive as ever, asked him where he thought he was going on his day off. When he said to watch his son play cricket for Middlesex, Jones told him he couldn’t as he had work. Mitchell went to watch his son play. He, and Jones and England, parted ways shortly after.

Mitchell senior was at the game, and would have watched his son play with no small amount of joy and redemption on Wednesday. He may also have reminded himself of how England beat New Zealand in the semifinal of the Rugby World Cup that year and how they celebrated at the final whistle. He may have wondered what would have been had they stopped, taken a breath and done a Neesham. The job was not yet done.

The job was not done when Neesham got out of the chair he would later spend some time in, to take the fight to England. They needed 57 from 24 balls to win.

“Chris Jordan, England’s one genuine death-overs specialist, was completely marmalised by Neesham in the following over,” wrote Simon Burton in the Guardian.

“Neesham hit his second ball for six, took 23 off the 17th over bowled by Jordan and spurred Mitchell into action by striking the ball as no-one else, up to that point, had been able to. His evident belief was contagious,” wrote Mike Atherton in The Times.

His six was the “shot [that] became the centrepiece of New Zealand’s breathtaking resurrection,” reported ESPNcricinfo.

The Telegraph’s Scyld Berry put it thus: “Neesham manages to exude the devil-may-care attitude of a World War 2 pilot. He has the handlebar moustache and nonchalance as he strides out for a challenge, and chocks away!”

He may exude a sense of devil-may-care, but Neesham does care, deeply. He cared in 2019, he cared on Wednesday. He will care in the final this weekend.

After the 2019 final, Neesham was seen still in his pads, distraught at the loss, long after the match had ended, the stories had been filed and the sounds of the England team partying ringing around Lord’s. After the handshakes and the post-match TV and the hugs between teammates on Wednesday, Neesham returned to his chair by himself and sat there. He may die at 60, and he may die fat, but, you hope, he does so happy.