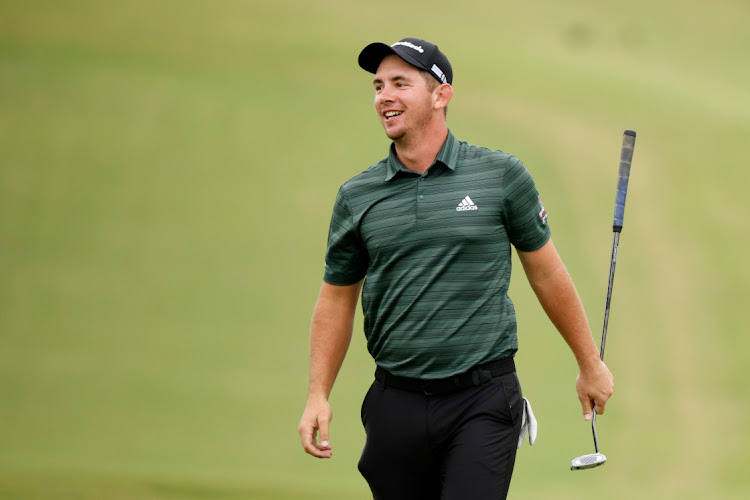 Lucas Herbert of Australia celebrates on the 18th green after winning during the final round of the Butterfield Bermuda Championship at Port Royal Golf Course on October 31 2021 in Southampton, Bermuda. Picture: GETTY IMAGES/CLIFF HAWKINS

Lucas Herbert’s decision to bring his coach across to Bermuda to help work on his swing proved a masterstroke at the weekend when the Australian secured his maiden US PGA title at the Butterfield Bermuda Championship.

The 25-year-old, who won the Irish Open in July to add to his previous European Tour win at the Dubai Desert Classic, became the first Australian man since Adam Scott in 2008 to win titles on the world’s two biggest tours in the same season.

Along with a cheque for $1.17m, 500 FedExCup points and a two-year exemption on the PGA Tour, the victory earned Herbert tickets to next year’s Masters and January’s Tournament of Champions in Kapalua, Hawaii.

“I’ve never played Augusta, so being able to play the Masters is going to be pretty cool,” he said after his victory at Port Royal on Sunday.”

Getting coaching help to prepare for the tournament was by no means straightforward as border controls in place when Dom Azzopardi left Australia meant there was no guarantee he would be able to get back into the country.

“My game was really, really struggling and I decided to call in and get him out over here,” Herbert said. “At the time it looked a bit dicey trying to get him back into Australia ... so for him to make that commitment to come out and help me out a lot with my golf swing ... to have it pay off so quickly and to share that win with him, that was really special.”

Herbert, whose first title came in his 19th start on the PGA Tour, was reluctant to talk about his expectations for the future.

“Too easy when you win to think you’re never going to not win again,” he said. “So I think the next few days we’ll sit back and think and celebrate and then reset some plans going forward.”

Herbert finished one stroke better than Patrick Reed and New Zealand’s Danny Lee, who held the lead at 15 under as he made the turn, but at No 12 a series of misplayed shots led to a double bogey. He went on to bogey the next two holes and seemingly drop out of contention, but followed with three straight birdies at No 15-17 to give Herbert a scare.

“A lot of good and a lot of bad,” Lee said of his day. “I fought really hard for it, just 12 through 14 was a very, very tough stretch for me. I hit a really good shot on 12, just went over the green by I don’t know how much, but it was kind of a tough shot from back there. Made a silly double there. I was just kind of a little confused with my putting.”