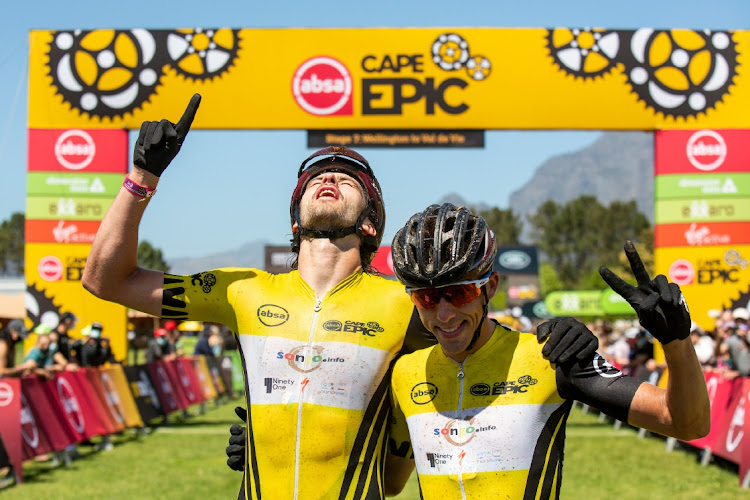 The Absa Cape Epic ended as it began. The NinetyOne-songo-Specialized women’s and men’s teams, having started this race in yellow on the slopes of Table Mountain eight days ago, ended it in yellow on the fields of Val de Vie on Sunday.

Matt Beers was emotional as he spoke of being just the second South African to win the race, after the late Burry Stander, who won it in 2012 and was killed in an accident in 2013. Beers and teammate Jordan Sarrou, who became the first Frenchman to win the race, played a canny game after taking the lead on day one, ensuring they were in touch with the front of the group daily.

“This is just an incredible feeling,” said Beers. “Burry set the bar very high; he was such a great mountain biker. I honestly didn’t think I could ever achieve this. I have to say thank you to Jordan. He’s been such a great partner all week, a real superhero. I never thought this was possible. When we started and won the Prologue I thought that was amazing, but to have held it all the way through, I just can’t thank the team enough, we had an amazing team.”

Beers, who converted from motocross to mountain biking as a form of rehab, was backed up superbly by Sarrou. They never looked in danger, no matter that the German team of Martin Frey and Simon Stiebjahn (Bulls 2) had an outside shot at the overall win on the last day. In the end, Hans Becking and Jose Dias (Buff Scott), won the final stage after an early attack was converted into a third stage win for the Dutch-Portuguese team.

Becking and Dias took third overall, behind Frey and Stiebjahn, in a race that was hit by rain, wind, cold and a tummy bug. The most important question at the end, said Becking, was who was buying the drinks.

“I was asking Jordan, ‘who is paying for the first round tonight’, then I said ‘OK, you guys won, so I will buy the first drinks’,” said Becking. “We went flat out today to overtake Trek-Pirelli. We gave it our all to get that third place. I went into that first climb and gave everything I had.”

“This is just incredible,” said Sarrou. “I have no words. It’s been such an amazing week riding with Matt. We had the yellow jersey right from the start and we never let it go. It feels amazing to win the Cape Epic. Thank you to the entire team — the staff, the mechanics, everyone involved has made this possible.”

The Swiss-Austrian duo of Sina Frei and Laura Stigger marked their utter dominance of the women’s race by winning their eighth stage, a staggering performance by the young Epic debutants. Just 24 and 21 years old respectively, their victory could signal a period of control over the race not seen since Denmark’s Annika Langvad won five on the trot with three different teammates.

The two have seemed a little overwhelmed at just how well they have performed, with Frei, a silver medallist at the Tokyo Olympics, struggling to take it all in.

“It’s unbelievable. We came into the Cape Epic to ride and do well, but I never expected to win this race. We have just been a good team all week. We got onto the podium and we never left. I’m really happy right now. Laura and I are good friends and I think this helped us throughout the week.”

South Africans Candice Lill and Mariske Strauss (Faces CST) took second on the final day and overall, as well as the Absa African jersey for the top-performing team from the continent. It had been an up-and-down Epic for them, their first as a partnership, with Strauss crashing four times in the first few days. South African Robyn de Groot came home in third with her Swiss partner Ariane Luthi (Salusmed) after a challenging few days.

“On the start line this morning our plan was to attack early to go for the stage win,” said Lill. “We started off well and set the pace, but we quickly realised the legs were gone after the last few days. Mariske also had a triple puncture, so we had a small panic with that, but we quickly sorted it out and kept moving.”

“I didn’t feel myself at this event,” said De Groot. “At some stages, I didn’t feel like I could make it to the finish. I had to put on a poker face and just hang on to this superstar Ariane.”