Eagle putt at the 14th sees Ulsterman home by one shot 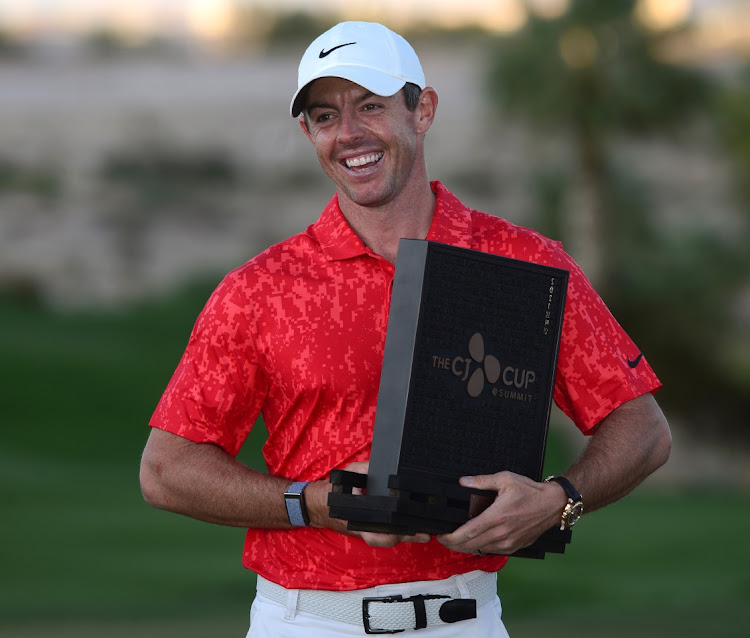 Rory McIlroy converted an eagle putt from off the 14th green on Sunday and held on for a one-stroke win at the CJ Cup at Summit in Las Vegas.

The four-time Major champion from Northern Ireland posted a final-round six-under 66 to go 25 under over four days. Collin Morikawa eagled the last hole for a 10-under 62, coming up just shy for second place at 24 under.

It was McIlroy’s second win of the calendar year and his 20th career PGA Tour victory.

“To get to 20 wins out here is a big achievement,” McIlroy said. “Yeah, I mean, I didn’t know if it was going to be this week, but I knew if I just kept my head down and kept playing well and doing the right things, eventually I’d get there.”

Playing in the final pairing with 54-hole leader Rickie Fowler, McIlroy made five birdies and one bogey before reaching No 14, a par 5. His second shot landed short of the green, but he used his putter to sink an uphill 35-footer.

“I never really saw it as a chip, I saw it as a putt,” McIlroy said. “There wasn’t much break in it actually. The only thing I needed to do was get the speed right and just try and judge what it was going to do coming through that first little bit of fairway. And it came out really nice. It grabbed the hole, or the hole grabbed the ball maybe is a better way of putting it.”

McIlroy, who posted a 62 on Saturday to shoot up the leader board, was playing his first competitive golf since last month’s Ryder Cup, when Team USA beat his European side 19-9. He said he had done some reflecting since that week.

“I felt like I started to work on the right things on my game,” he said. “I didn’t think that it would translate into a win this quickly, but I’m thankful that it did.”

Morikawa, the No 3 player in the world, was considered the favourite entering the week because The Summit Club is his home course.

That local knowledge proved useful on Sunday, as he made seven birdies on the front nine to go out in 29 and made eagle on the par-5 18th by landing his second shot inside seven feet of the pin.

“I was actually trying to land it just short of the ridge, but we knew if I flushed a four-iron and I got some height on it, it would stop,” Morikawa said. “It was just exactly pretty much how we planned out. Always nice to finish on a couple of good swings.”

Fowler slipped out of the lead with a double bogey at the par-5 seventh en route to a one-under 71. He had to take an unplayable lie after his second shot at No 7 and eventually three-putted.

Fowler finished tied third with Keith Mitchell (67), which he called “a big step in the right direction” after failing to qualify for the FedExCup Playoffs last season. It is his best finish since March 2019, when he tied for second at the Honda Classic.

“It felt good to finally hit the golf ball properly, at least most of the time, for 72 holes,” Fowler said. “A lot of quality shots, a lot of good swings this week.”

Normally played in South Korea as part of the tour’s Asian swing, the CJ Cup was held in the Las Vegas area for the second straight year due to Covid-19 pandemic travel restrictions.