Being forced to travel between SA and Ethiopia slows her down, says winning runner 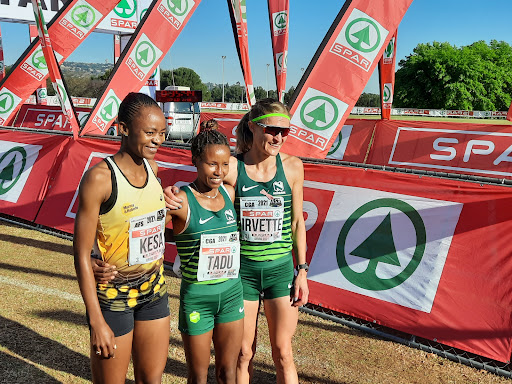 Ethiopian runner Tadu Nare (Nedbank) won the Johannesburg leg of the Spar women’s 10km race in 33 min 20 sec on Sunday at Marks Park to tighten her grip at the top of the Grand Prix.

Tadu, followed home by Kesa Molotsane of Murray & Roberts (34:34) and Irvette van Zyl of Nedbank (34:40) in second and third place, will be crowned overall winner in Gqeberha next weekend with another podium finish.

She travels to Gqeberha next weekend in red-hot form having won all the previous races of the season in Pietermaritzburg, Cape Town, Durban, Tshwane and Johannesburg.

Nare said her times throughout the season could have been better if she had been based in SA.

“The problem is the visa, because I only get five days to stay in SA and I am forced to travel between Ethiopia and SA. Travelling is very tiring and I believe that if I stayed here I could possibly run 10km in under 30 minutes.

“Fortunately, weather conditions in Ethiopia and Johannesburg are similar and if I stayed here maybe I will run faster times. The course in Gqeberha next weekend is expected to be flat and I am hoping to run a faster time.”

Over the past few years, Helalia Johannes of Namibia and Nare have dominated the Grand Prix. Local runners Molotsane and Van Zyl said they welcome competition from outside the borders.

“In terms of performances, as SA runners we need a lot of competition from those coming from outside the borders,” said Molotsane.

“I really appreciate people like Tadu coming here because they push us beyond our limits. To be honest, I don’t have issues in having them around, I don’t see any problem with that and I will always vouch for them to be here because they keep us on our toes.

“Their participation also helps us to improve the quality of the athletics scene in the country as a whole. If we can’t do it as a family, at least we have to invite people from outside the country to help us achieve what we want to achieve,” said Molotsane.

“They keep the competition interesting and they help us to run faster times. They are definitely benefiting us all and they keep us on our toes. They help us to get to good fitness levels and better on the road.

“Tadu is currently running away with the Grand Prix but we will slowly but surely get there to match her pace. Year in and year out, times are getting faster because of them and that can only benefit us to run faster and better.”