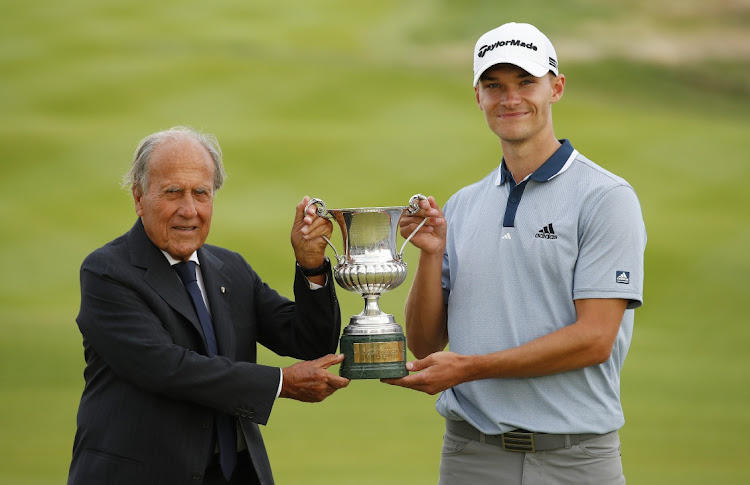 Nicolai Hojgaard of Denmark poses for a photo with the trophy and Franco Chimenti. Picture: LUKE WALKER

Rome — Denmark’s Nicolai Hojgaard picked up his maiden European Tour title by winning the Italian Open in dramatic fashion on Sunday, one week after his brother Rasmus had earned victory at the last tour event.

Briton Tommy Fleetwood continued his preparation for the Ryder Cup, the team competition between the US and Europe which will be held from September 24-26 at Whistling Straits in Wisconsin, by finishing tied for second place.

Fleetwood, without a European Tour victory for almost two years, had holed a 4m putt to tie for the clubhouse lead as Hojgaard prepared for the 18th, with the Dane finding the rough off the tee.

But a fine third shot to within 1m of the hole gave Hojgaard a chance to clinch victory on the final hole, with his birdie ensuring the Dane became the youngest Italian Open winner in history.

The 20-year-old celebrated with Rasmus, who won the European Masters in Switzerland last Sunday, as the brothers became the first male siblings to win back-to-back European Tour titles.

“I made a few stupid mistakes on 14 and 15 and you start to think what’s going to happen now,” Hojgaard told Sky Sports. “I was getting emotional after the last putt. I could see my caddie, my girlfriend, Rasmus and his girlfriend. It has been a perfect week. To finish it off like this, the week after Rasmus won, is perfect.”

The best home hope came through Eduardo Molinari, brother of Francisco Molinari, who enjoyed much success as Fleetwood’s partner in Europe’s victory at the last Ryder Cup in 2018, as he finished tied fifth.

Fleetwood shared second spot with Adrian Meronk following the Pole’s impressive final round of 66, and is certain to be in Padraig Harrington’s team in three weeks’ time, as he sits second in the Ryder Cup points leader board on the European Tour.

A nod to the success of the Games, the final event of Tokyo 2020 took the country’s medal tally to seven
Sport
3 weeks ago
Next Article