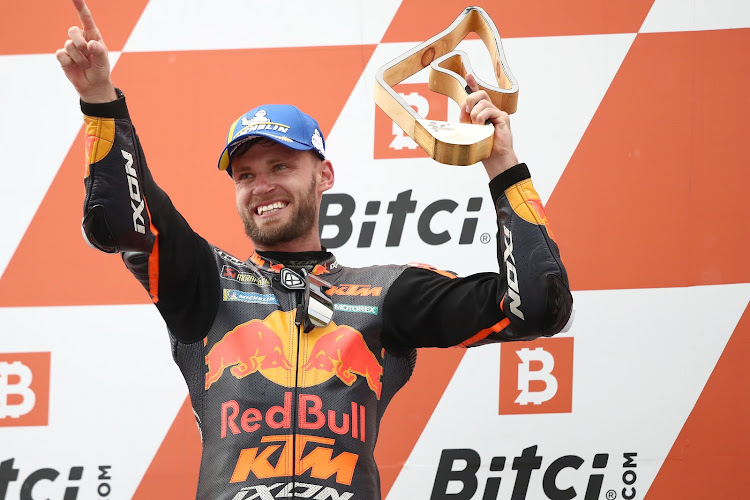 London — South African Brad Binder delivered a sensational home Austrian Grand Prix win for his KTM team on Sunday after a late, crazy gamble to stick to slick tyres on a wet and slippery track paid off.

As the rain came down and the top five peeled into the pits at Spielberg’s Red Bull Ring to switch to bikes shod with wet tyres, sixth-placed Binder stayed out and hung on in the downpour for three wild laps.

“Sometimes life favours the brave and today it worked,” said the 26-year-old.

Ducati’s Italian factory rider Francesco Bagnaia, who had led for much of the race and was one of the front-runners who pitted, roared back through the field to take second place but was 9.991 sec behind.

Spanish rookie pole-sitter Jorge Martin, winner on the Pramac Ducati at the same track a weekend earlier, finished third in front of 86,000 spectators.

Binder was handed a 3sec penalty for exceeding track limits on the last corner as he struggled to keep the sliding bike on the line but it was ultimately meaningless, with the gap big enough.

The win was the second of his career, after another shock success at Brno in the Czech Republic a year ago in his rookie season.

“That was really scary,” he said. “The last two laps were something else. I could push quite hard still for the first lap but as soon as the rear and front tyres cooled off it was like riding on ice.

“A couple of corners later my carbon brakes went cold so I had no brakes either. I think there was someone holding me up there today because there were a couple of times where I thought it was over.”

Binder said he had been all set to dive up the inside of the leaders at the second-to-last corner when he sensed they were about to pit.

As soon as he saw them do so, his mind was set and he went straight on.

“I knew it was three or four laps to go and I said ‘OK if I can stay up the only people who can beat me are people who stayed out too. I almost didn’t stay up, but anyhow …”

Bagnaia, who passed six riders on the last lap but ran out of time to reclaim the lead, was impressed with his rival’s bravery.

“For sure Brad did something incredible today because to stay on track with slick tyres in these conditions is so difficult,” he said.

The race was declared dry before the start, with Martin leading Bagnaia into the first corner while Quartararo dropped from third to sixth with four Ducatis in the top five.

Quartararo then came back to battle Bagnaia along with Marc Marquez, Martin and Pramac’s Johann Zarco, who crashed out of contention with 11 laps remaining.

Marquez also went down with two laps to go but got the bike going again.