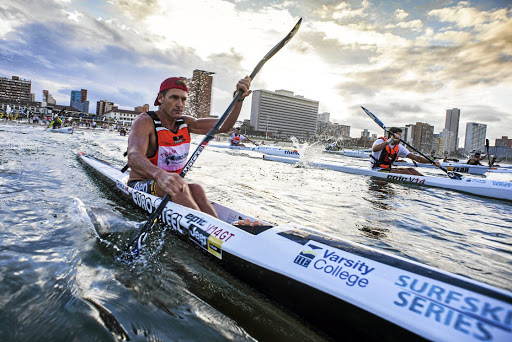 Paarl — This year’s Berg River Canoe Marathon will sport a men’s field like no other when a swathe of former champions and young hopefuls line up for a shot at the race’s 60th title from August 5-8.

After Hank McGregor, now 42 years old, submitted his entry and added another level of prestige to the men’s race, the last-minute arrival of the evergreen Graeme Solomon tipped the title race into uncharted territory.

McGregor is the race’s most decorated champion, having won it 11 times and the current holder of the overall race record from his 2008 victory. After 15 months of lockdown that have stifled his competitive ambitions, the Durbanite is hungry for a 12th title, particularly with the Covid-19 cloud of doubt hanging over the rest of the year’s international competition calendar.

The Euro Steel ace first triumphed as a 22-year-old in 2000, and has been the dominant force in every year that he has raced the famous four-stage race from Paarl to Velddrif. But for his 14th Berg he will find himself under more pressure than before to return to the top of the podium.

The man he partnered at the World Championships K2 title in Portugal in 2018, Andy Birkett, is himself a former Berg champion, having added his name to the trophy in 2014. As part of the new Kindo-backed reciprocity with the MyLife Dusi, he will return with renewed determination, particularly after the drama at the national marathon championships in Cape Town in May.

Considered a shoe-in for the national team to be named for the world champs in Romania in September, Birkett was sensationally edged out of the top two places in the senior men’s singles race, and suffered the same fate in the doubles race the next day.

With the world champs now out of the equation, the East Londoner had little hesitation in shifting his attention to the 60th anniversary edition of the Berg, with its lucrative prize pool, but more importantly, the prospect of racing one of the strongest elite fields yet assembled for the race.

Perennial podium finisher and 2001 champion Solomon will always add another exciting string to the competitive bow of the Berg. With knowledge almost second to none on this stretch of river, he will forever remain a threat to anyone looking for the title.

In Paarl on Thursday morning these hopefuls will find another man on the start line that has tasted success as a K2 marathon world champion with McGregor in Jasper Mocké, who is keen to return to the Berg podium. But perhaps the biggest threat to that podium will come from McGregor’s regular training partner from the MacSquad based at Blue Lagoon in Durban, Hamish Lovemore.

Lovemore won the Berg team title in 2019 with Tyron Maher, a win that has propelled his paddling career to new heights. The Under-23 speedster was the stand-out performer at the SA Marathon Champs at Zandvlei earlier this year where he won the Under-23 K1 title before dethroning McGregor in the senior men’s title race and then adding the senior K2 title to a staggering clean sweep at the Vlei.

Lovemore gravitates naturally to the tougher endurance elements demanded from the Berg, and with his youth and big training base, accumulated river knowledge as well as his Durban training partner at his side, he will pose a serious threat to the top step of the podium.

Two former winners of the Berg are likely to feature in the enlarged front bunch in the early stages of the race as Jacques Theron and Robbie Herreveld return to the race they dominated in their youth.

Joining the list of former winners on the start line in Paarl is the remarkable Jannie Malherbe. Part of the inaugural Berg in 1962 the 82-year-old winner of a hat-trick of Bergs from 1963 to 1965 will be starting his 48th Berg.

Guan Chenchen secures the gold medal and compatriot Tang Xijing silver, but the American grabs the spotlight for her courage
Sport
1 year ago

Gold medallist Tatjana Schoenmaker says if she has given someone hope, she has achieved a lot
Sport
1 year ago