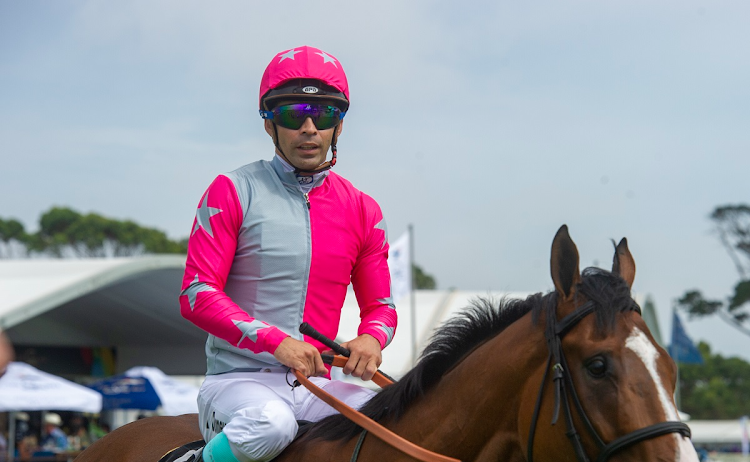 Jockey Aldo Domeyer — sidelined in recent weeks with a broken thumb — makes a surprise visit to the Vaal on Tuesday for just two rides but should not return to the Cape empty-handed.

His principal ride is Abulus — co-owned by his father Andrew Fortune — who looks ready to exit the maiden ranks when taking on nine rivals in the second race. A daughter of Jackson, who is now standing at Heversham Park Farm in Gauteng, Abulus has finished runner-up in four of her five career outings.

Her most dangerous opponent is likely to be Sean Tarry’s Willow Magic filly Magic To The Fore. She finished second behind Paityns Pride at Turffontein, but that win failed to boost the form when beaten 12 lengths at Greyville last Saturday.

Warren Kennedy rides Eastern Belle for Corné Spies while the market will be worth a check for St John Gray’s newcomer Indigo Winter whose full-sister Indy Go has joined Jarrett Rugg’s stable in the Eastern Cape.

It is perhaps surprising that Domeyer has not also been engaged for two other inform performers for the Fortune stable, Bella Chica and On Cue. Bella Chica, a daughter of Rafeef, enjoyed a good first season with three wins from seven starts. Calvin Habib rides the three-year-old for the first time.

The likely favourite in this 1,000m sprint is Paul Peter’s What A Winter filly Cold Fact. She also did well last term chalking up three wins from six outings.

Of the remainder, Winter Watch, the mount of S’manga Khumalo and Spanish Song both go on the shortlist of possible winners after good efforts behind Emerald Crest.

St John Gray saddled a winner at Turffontein on Sunday and Domeyer will be in the irons on his seventh race runner Twelve Oaks. With three placings from her past four starts, a fifth win is very much on the cards.

Now seven years old, Twelve Oaks has had many different jockeys during her career but this is the first time Domeyer has been in the saddle. The runner he will fear most is Paul Peter’s two-time winner Belle Of Belize.

This column has selected Snow Symphony to win on a number of occasions only for the Oratorio filly to be withdrawn from her engagements. Hopefully, David Nieuwenhuizen’s four-year-old will contest the eighth race as this full-sister to Rio’s Winter is bred to take a modest contest like this one without much fuss.

The other horses are Suited Connector and Florida Keys while Rainy Season rates an each-way shout if producing his best form for trainer Weiho Marwing.

In the fourth race, trainer Ashley Fortune has kept faith with Philasande Mxoli for another daughter of Oratorio On Cue. The filly’s second behind Sheela is the best form in this 1,000m dash.

Upcloseandpersonal — a R400,000 daughter of Captain Al — does duty for the Tarry stable and will have her supporters. Lady Nica had an identical price tag but was found to be not striding out in her most recent appearance.