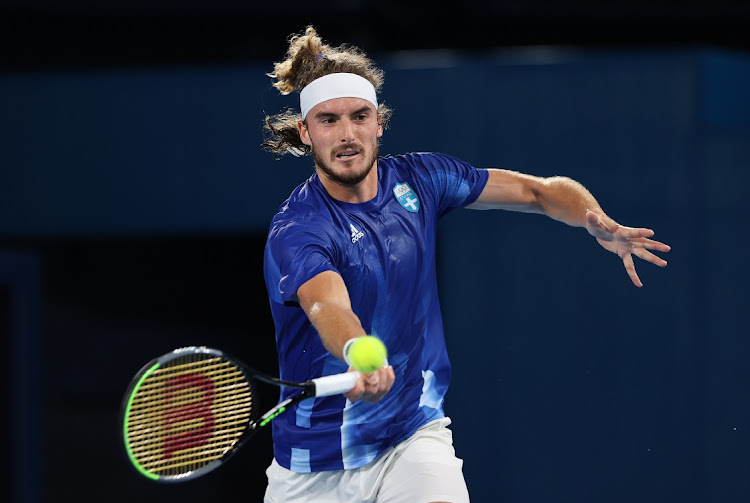 Stefanos Tsitsipas of Team Greece plays a forehand during his Men's Singles Second Round match against Frances Tiafoe of Team USA on day four of the Tokyo 2020 Olympic Games at Ariake Tennis Park on July 27 2021 in Tokyo, Japan. Picture: GETTY IMAGES/CLIVE BRUNSKILL

Tokyo — Greece’s Stefanos Tsitsipas advanced to the third round of the men’s singles tennis at the Olympic Games while Japanese medal hopeful Naomi Osaka was eliminated from the women’s event after a surprise defeat on centre court on Tuesday.

The roof of the main show court at Ariake Tennis Park was closed to allow the day’s marquee matches to go ahead, though play was briefly suspended elsewhere during a morning downpour in Tokyo.

Men’s world No 4 Tsitsipas avenged his straight-sets loss to Frances Tiafoe at Wimbledon in June, taking out the American 6-3 6-4 to book a place in the third round.

Tsitsipas attributed his win to improved “concentration and attention levels” at the Games. His Wimbledon first-round loss had come just days after he was beaten in a heartbreaking five-set defeat to top-ranked Novak Djokovic in the French Open final.

Argentina’s Diego Schwartzman, who took the court after play resumed in the afternoon, also moved into the third round with a 6-4 7-5 win over Tomas Machac of the Czech Republic.

The women’s draw was thrown wide open after four-time Grand Slam champion and world No 2 Osaka was downed 6-1 6-4 by Marketa Vondrousova in one of the biggest upsets of the Games.

Osaka, who returned to competition this week after pulling out of the French Open in May citing mental health issues, never found her stride against the 42nd-ranked Czech, later attributing the loss to the pressure she faced as one of Japan’s most prominent Olympic ambassadors.

Vondrousova, who had never played Osaka before, described the match as one of the biggest victories of her career.

“Of course it’s one of the biggest. Naomi is a great player, she has so many Grand Slams, so I knew it would be a tough match. But I’m just very happy with my play,” the 22-year-old said.

Osaka’s loss came after top-ranked Ash Barty and world No 3 Aryna Sabalenka were sent out in earlier rounds.