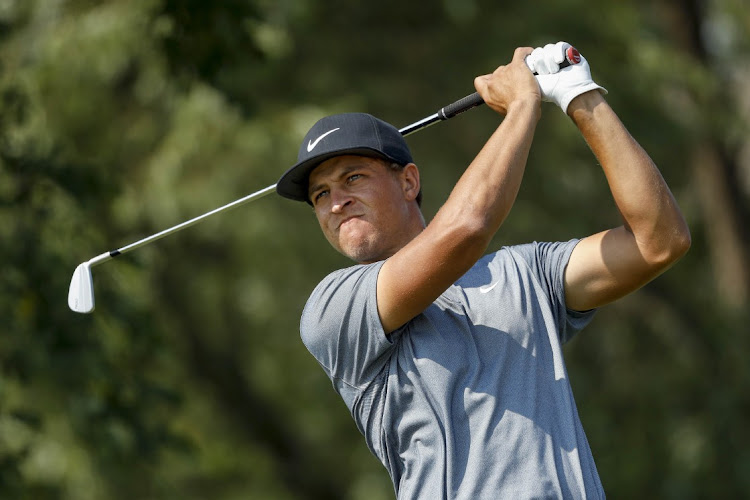 Cameron Champ tees off on the 16th hole during the final round of the 3M Open golf tournament in Blaine, Minnesota, the US, July 25 2021. Picture: BRUCE KLUCKHOHN/USATODAY SPORTS

Cameron Champ emerged from a crowded leaderboard with a final-round five-under 66 on Sunday to win the 3M Open for his third PGA Tour victory.

Champ made a crucial par save on the par-five 18th hole at TPC Twin Cities in Blaine, Minnesota, to finish with five birdies and no bogeys on his card.

With a 15-under 269, Champ beat Venezuela’s Jhonattan Vegas (68 Sunday) and South Africans Louis Oosthuizen (66) and Charl Schwartzel (68) by two strokes. Keith Mitchell shot a final-round 67 to take fifth place at 12-under.

Two of Champ’s three birdies on the front nine came on par-three holes; he landed his tee shot on four just 40cm away, then put his first shot on eight inside 3m. Champ birdied numbers 11 and 16 and took a two-shot lead onto the final tee box. But his drive careened far left and he was forced to punch out of the rough.

Needing to make no worse than bogey to win the tournament, on his fourth shot Champ hit a gap wedge over a water hazard and spun it back to within three feet of the cup to set up a tap-in par.

“Coming down the stretch I felt very calm, very relaxed and kind of in my zone,” Champ said. “Obviously 18 made it a little interesting. I felt like I hit a great second shot from where that lie was, and obviously hit a great approach there into about two feet and made the putt.”

After winning tournaments in each of the past two seasons, Champ was having a poor year before arriving at TPC Twin Cities. He had missed more cuts (11) than he’d made (10) entering the event and was on the outside of the FedEx Cup Playoffs looking in.

Champ’s finish was projected to vault him up the FedEx Cup standings from 142nd place to 49th.

“I had to figure out how to manage everything and how to manage my own expectations and what I want to do in life,” Champ said. “I was just putting a lot of stress on myself and doing things that I usually wouldn’t do and acting certain ways that I usually wouldn’t act on the course. So I just had to take a step back and say, you know what, this has to stop. I’ve got to be more true to myself no matter what happens.”

Oosthuizen followed up his third-place finish at last week’s Open Championship by tying for second, his fifth top-three finish of the calendar year without a win.

But he shot in the 60s for all four rounds, saving his lowest score for Sunday, when he sank seven birdies to counteract two bogeys.

“I was happy to play this week,” Oosthuizen said. “I sort of didn’t really want to just think about last week, about not playing great on that Sunday and immediately quickly go back into tournament mode and then play this tournament. We had a good time here this week and I’m just trying to see if I can go one better than all these seconds and thirds.”

The PGA Tour is off next week for the men’s golf event at the Tokyo Olympics.

Nedbank Golf Challenge called off due to Covid-19

Unlike Open champion Morikawa, the late Simon Hobday was a live wire who played with his heart on his sleeve
Sport
2 months ago