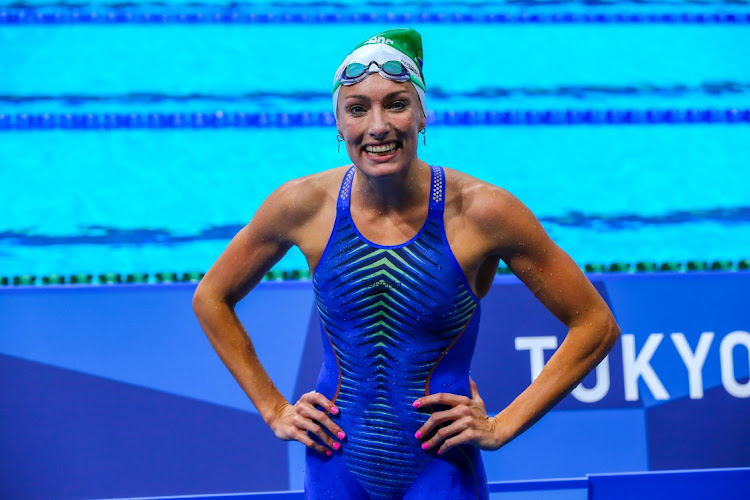 Tatjana Schoenmaker sounded a serious warning to her Tokyo Games rivals on Sunday evening as she broke the 100m breaststroke Olympic record in the heats.

Schoenmaker went into the showpiece seeded fourth in this event and first in the 200m breaststroke, but she threw down the gauntlet as she powered into the lead and almost lost her green cap on her way to clocking 1 min 04.82 sec to win her heat.

And given how she floated into the wall, there’s room to go even faster.

For Schoenmaker, who took nearly a second off the 1:05.74 African record she posted in April, said she was surprised and warned that the others would go faster.

“I didn’t expect that at all. Obviously my 200 is always a little better, but it was a good swim ... Because it was my first race I gave it all from the start, I really just wanted to go out, get my pace up, but obviously didn’t expect that fast.”

Schoenmaker played down her effort, warning that the others were going to come at her.

“I think most of the girls are going to swim much faster tomorrow. I’m just trying to get into the final and just have a lane there.

“The 100s not my best, but that’s why I was so shocked. I’m very excited to race the other amazing girls I didn’t race today.”

She insisted she was feeling no pressure, saying her main goal was to swim best times. “I already did it so that means it’s off my shoulders.”

However she dresses it up, Schoeman has signalled a clear intent that she’s on the hunt for two medals in Japan. Her performance also delivered much needed impetus to Team SA after two mostly lacklustre days of Olympic action.

Cyclist Ashleigh Moolman-Pasio offered SA a chance in the women’s 137km road race, finishing a respectable 13th overall after the peloton misjudged the danger of an early breakaway, from which Austria’s unheralded Anna Kiesenhofer claimed the gold.

Moolman-Pasio, 17 seconds behind the bronze medallist, will launch another podium assault on Wednesday, this time in the individual time trial, an event where she can rely more on her own skills rather than the tactics of teams around her.

Surfer Bianca Buitendag battled her way into Monday’s third round of the women’s competition, where she was drawn to take on world No 5 Stephanie Gilmore of Australia.

The men’s Under-23 football team at least entertained as they went down 3-4 to France, blowing the lead on three occasions in the second half, when they led 1-0, 2-1 and 3-2 before conceding a late penalty and then the winning goal in stoppage time.

Kobamelo Kodisang, Evidence Makgopa and Teboho Mokoena scored for SA, but Luther Singh missed a penalty and Luke Fleurs botched an opportunity to equalise in the dying moments when he kicked over the bar with the net at his mercy.

The Olympics are tough. The rowers learnt that in the morning as the men’s four, who went to Tokyo as contenders, were eliminated as they ended last in their repechage. They will race the B-final on Wednesday.

Brandon Valjalo, with his arm in a plaster cast after breaking his wrist a couple of days earlier, took a few spills as he ended third from bottom in skateboarding’s Olympic debut, in the men’s street discipline.

The men’s water polo team crashed to a 21-2 defeat to world champions Italy, the Olympic bronze medallists five years ago.

Schoenmaker’s training partner, schoolboy Pieter Coetzé, managed only 54.05 sec in the 100m backstroke heats, which placed him 24th in a field of 40.

Training in Spain for the Tokyo Games has imbued SA’s road riders with a quiet confidence, and a battle plan
Opinion
1 month ago

"Japan is good at taking things from zero to one, and not so much at taking them from one to 10," he said. "Japan wins in technology and loses in ...
Business
1 month ago

From YouTube to Netflix, Amazon Prime Video and Showmax, there is plenty of sporting-themed entertainment at the start of the Olympic Games
Life
1 month ago