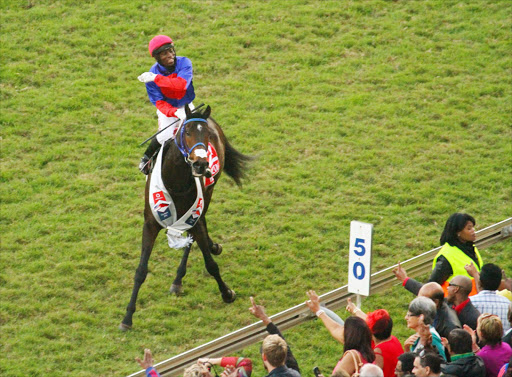 During his playing days for Manchester United, the club’s current manager Ole Solskjaer was known as “super sub” for scoring late goals. That tag can now be applied to Gauteng-based jockey S’manga Khumalo for several top stables are booking him for their second-string runners.

Here are some of the facts:

1. In the Vodacom Durban July Justin Snaith’s stable jockey Richard Fourie opted to ride Do It Again, which left the yard looking for a rider for 2020 winner Belgarion. They settled on Khumalo but they did him no favours as the five-year-old was never a factor and trailed in ninth, five lengths behind Kommetdieding.

2. In next Saturday's Champion Cup, Fourie has again chosen Do It Again — no surprise considering his good July run — in preference to Queen’s Plate winner Dark Jet. When he was approached to ride the three-year-old, Khumalo could be forgiven if he had said: “I hope he runs better than Belgarion.”

Unfortunately, that is not a given. Jet Dark has not been seen in action since that Queen’s Plate win with big three-year-old races such as the Daily News 2000 going by without him. The conclusion has to be that the son of Trippi has his issues.

3. Champion jockey Warren Kennedy found himself in a difficult position in next weekend’s Kuda Gold Bracelet with both Summer Pudding and She’s A Keeper accepting to run. He really had little option but to go with Paul Peter’s champion given her excellent record and great win from a bad draw in the Summer Cup.

That left trainer Gareth van Zyl without a jockey for She’s A Keeper, the solution ... book Khumalo. Many pundits expressed the opinion that loyalty to Van Zyl was going to cost Kennedy the chance of a first July win and so it proved. The filly finished in 10th place, six lengths behind the winner.

However, the daughter of Gimmethegreenlight, who went into the July boasting five wins from six starts, is back in calmer waters in the Gold Bracelet. In fact, the gallop website shows her as a runaway winner.

The market on this grade 2 race needs monitoring closely. It is possible that Summer Pudding — without a race for three months and not suited to Greyville — will drift in the betting as support comes for She’s A Keeper and Candice Bass-Robinson’s runner Chat Ching. The daughter of Duke Of Marmalade finished a creditable fifth in the Garden Province Stakes.

The opening price of 8-10 about Summer Pudding — even when one considers her excellent record — appeals about as much as a visit to the dentist. No surprise if bookies are offering 15-10 by race time.

Add to the equation Sean Tarry representative Victoria Paige — third behind Summer Pudding in the Gauteng Fillies Guineas and surely overpriced at 18-1 — and the race should be a wonderful finale to the 2020/2021 season.

4. Another case of Kennedy’s loyalty to the Van Zyl stable in the Mercury Sprint with the 41-year-old opting to partner Chantyman rather than Paul Peter’s runner MK’s Pride. Despite the fact he has never sat on the Hawaii Stakes winner, the call has again gone out to Khumalo.

In the Marshalls World Of Sport Gold Cup, Khumalo partners eight-time Don’t Look Back and this is a horse he knows well. St John Gray has enjoyed a successful season but the gelding’s most recent run — last of five behind Out Of Your League — is a worry for his supporters.

• “Horses like him don't come around too often,” enthused jockey William Buick after Adayar won Saturday’s King George VI and Queen Elizabeth Stakes at Ascot on Saturday. He is the first three-year-old to achieve the Derby-King George double since Galileo in 2001.

Bookmaker reaction was swift with Paddy Power cutting Adayar to 5-1 (from 10-1) for the Arc De Triomphe in Paris in October.

John Gosden, trainer of the runner-up Mishriff, confirmed his horse’s next start would be the Juddmonte International at York.

Cole Dicken can grab his chance on hot favourite at Vaal

After departure of Luke Ferraris, there is a suggestion that champion jockey elect Lyle Hewitson is also eyeing emigration
Sport
1 year ago
Next Article