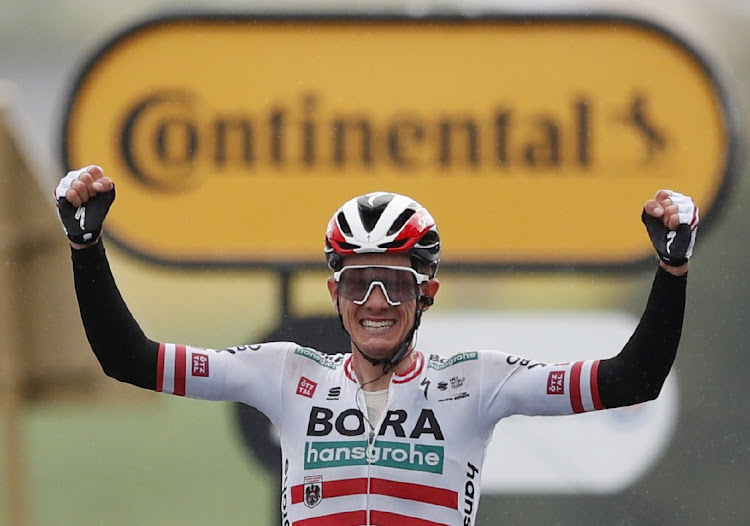 The Bora-Hansgrohe rider broke away from a small group 36.5km from the finish in the day’s last significant climb and never looked back as his chasers reacted too late.

Defending champion Tadej Pogacar retained the overall leader’s yellow jersey as the main contenders kept their powder dry ahead of Wednesday’s much-feared 17th stage to the Col du Portet, a 16km ascent at an average gradient of 8.7%.

Pogacar's group finished Tuesday’s stage 13:49 off the pace as the top positions in the general classification remained unchanged.

After a long descent in low temperatures and drizzling rain to reach the actual start of the stage, a leading trio opened a gap on the peloton but they had a 10-man group hot on their heels, as the main bunch gradually let it slide.

Fabien Doubey, Konrad and Jan Bakelants had 30sec on their chasers in the descent from the Col de la Core as they headed towards the Col du Portet d’Aspet (5.4km at 7.1%).

Konrad increased the advantage to 1:20 as he attacked on the climb.

France’s David Gaudu, a specialist climber, increased the pace from the chasing group and only Colbrelli, a sprint specialist, could follow, narrowing the gap to 30sec at the top.

But Konrad was the fastest in the treacherous descent where Italian Fabio Casartelli crashed and died in 1995, and he extended his lead again, holding off the chasing group.

Briton takes 10th stage, racking up his 33rd win, one fewer than the Belgian great
Sport
3 months ago
Next Article