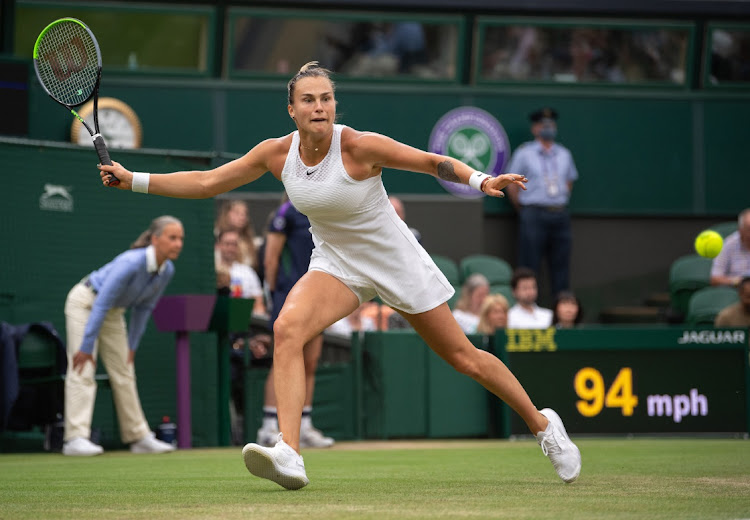 London — Power trumped panache as second seed Aryna Sabalenka blasted past Tunisian Ons Jabeur into the Wimbledon semifinals with a 6-4 6-3 victory under the Centre Court roof on Tuesday.

In a classic clash of styles the 23-year-old Belarusian had too many destructive weapons for Jabeur as she set up a clash with fellow big-hitter Czech Karolina Pliskova.

Playing in her first Grand Slam quarterfinal, Sabalenka kept the intensity and decibel levels turned up to 10 throughout, allowing 21st seed Jabeur few chances to settle. It was never completely comfortable and Jabeur, making history as the first Arab woman to reach the Wimbledon quarterfinals, did produce flashes of the mercurial game that has made her a favourite with the crowds this week.

But Sabalenka was relentless and closed out the win with her 27th winner of a match played mainly on her terms. “Guys, you make this place special, thanks so much for your support. The atmosphere was unbelievable today,” Sabalenka said of the 15,000 crowd on Centre Court — the first day of the tournament that 100% capacity was allowed.

“It looks like everything is working for me. It’s really tricky, shots on the grass. It fits my game and I’m really enjoying my time on the court.”

Jabeur had beaten three Grand Slam champions — Venus Williams, Garbine Muguruza and Iga Swiatek — en route to the last eighth and topped the list of match wins on Tour this season with Sabalenka, both having 33 to their name. She had a break point in the opening game but could not convert it and from them on the pattern of the match was set, with three- or four-stroke rallies the norm.

That suited Sabalenka and after the first nine games all went with serve Jabeur was the first to wobble at 4-5. Jabeur showed great dexterity to fend off three set points but she buckled on the fourth as Sabalenka crunched another ferocious groundstroke close to the baseline.

Cranking up the pace on her heavyweight serve, Sabalenka went 2-0 up in the second set but Jabeur replied to break back with a trademark drop shot and then hold for 2-2. But the Tunisian looked flustered by the depth and power of her opponent and her challenge faded away.

Former Wimbledon champion Angelique Kerber of Germany put in a strong show to beat an error-prone Karolina Muchova 6-2 6-3  to reach the semifinals. The 2018 champion, seeded 25th at the All England Club this year, arrived for the contest having defeated Czech Muchova both times in their two meetings in two weeks in 2019 and never lost control of the match.

Former No 1 Kerber, who won the Australian Open and the US Open in 2016, used her forehand immaculately against 19th seed Muchova and mixed her drop shots expertly to set up chances for winners.

Muchova, who had her left thigh strapped, did not help her cause by committing 27 unforced errors against the nine winners she managed during the 75-minute contest. The 19th-seeded Czech was also guilty of failing to take her chances, managing to convert only one of the eight break-point opportunities she had on the left-hander’s serve.

The 33-year-old Kerber, who arrived at Wimbledon with a title from Bad Homburg in the lead-up and is the only former champion left in the draw, broke Muchova twice in each set. The German sealed the contest when Muchova sent a forehand long on her second match point.

Kerber will meet the winner of the all-Australian clash between top-ranked Ash Barty and unseeded Ajla Tomljanovic for a place in Saturday’s final.

Imperious Djokovic brushes Anderson aside to reach third round