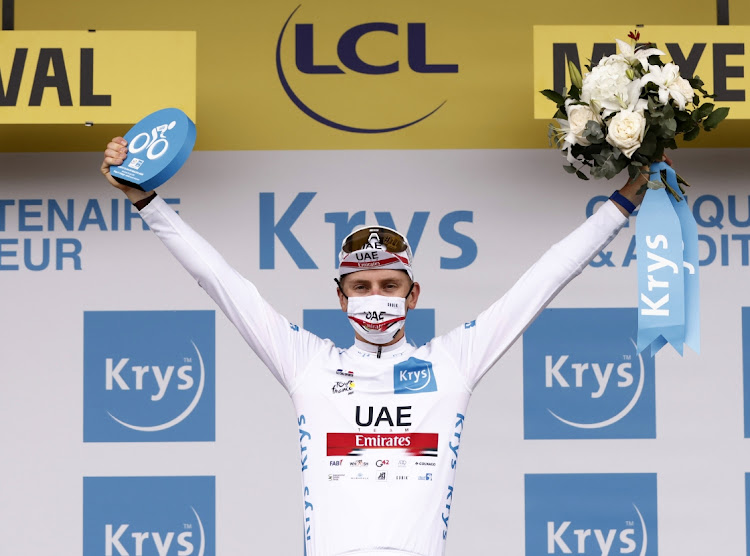 Tadej Pogacar of Slovenia celebrates on the podium after winning stage 5 of the Tour de France, June 30 2021. Picture: REUTERS/STEPHANE MAHE

Laval — Slovenian Tadej Pogacar has emerged as the overwhelming Tour de France favourite after he destroyed the field by winning the fifth stage, a 27.2km individual time trial, on Wednesday.

The defending champion clocked a best time of 32min between Change and Laval to beat Swiss Stefan Kueng, the European champion in the solo effort against the clock, by 18sec. Dutch Mathieu van der Poel took fifth place to retain the overall leader’s yellow jersey.

“I didn’t think I was going to keep the jersey. It was a great day, I’m really happy,” said Van der Poel, who is expected to surrender his lead when the race reaches the mountains on Saturday.

Pogacar’s performance is a blow to his rivals for the title as 2018 champion Geraint Thomas ended up 1min 18sec behind and last year’s runner-up Primoz Roglic finished 44sec off the pace.

Pogacar is now second overall, 8sec behind Van der Poel while Roglic is 10th, 1:40 down on his compatriot and Thomas 12th, a further 6sec behind.

Both Roglic and Thomas suffered nasty crashes in the opening days of racing and they are facing a huge challenge if they are to beat Pogacar. Another top favourite, Colombian Richard Carapaz, is ninth, 1:36 behind Pogacar.

France’s Julian Alaphilippe, who was hoping to recapture the yellow jersey, had an average day and slipped down to fourth overall, 48sec behind Pogacar.

Last year, the 22-year-old Pogacar was one of the top climbers in the race and was second on the last competitive day when he stunned Roglic in the final time trial to secure the title.