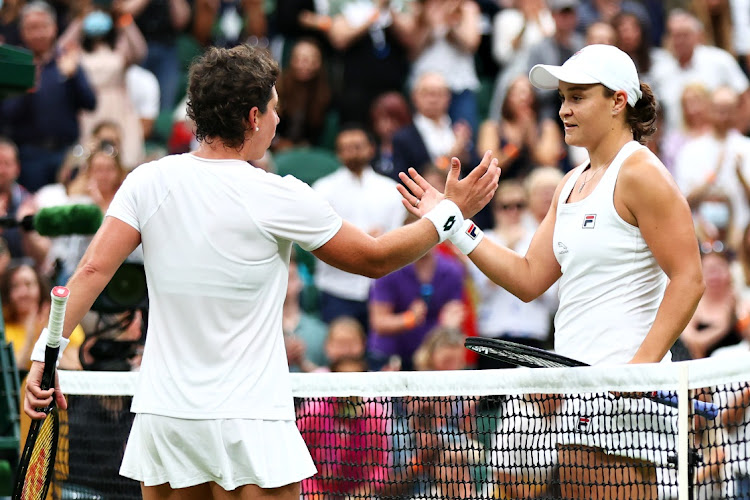 Carla Suarez Navarro of Spain and Ashleigh Barty of Australia at the net after their first-round match at Wimbledon 2021, in London, England, June 29 2021. Picture: JULIAN FINNY/GETTY IMAGES

But Spaniard Suarez Navarro, who in April announced she had been given the all-clear after treatment for Hodgkin lymphoma, a type of cancer, played a full part in an absorbing spectacle under the Centre Court’s sliding roof.

Barty used her all-court game, full of all manner of spin and angle, to great effect as she started and finished the match in dominant fashion.

But Suarez Navarro provided flashes of her signature single-handed backhand to help her push Barty to a deciding set after the Australian wavered when serving for the match at 5-4.

Suarez Navarro’s lack of matches — her French Open first-round defeat was her only other appearance this year — caught up with her in the end as Barty raced away to victory. But the former world No 6, who will end her career at the Tokyo Olympics, received a standing ovation as she departed the court for the last time with Barty leading the applause for the popular 32-year-old Spaniard.

“She’s a fighter, a great competitor and she will be sorely missed,” Barty, who showed no sign of the hip injury that forced her to retire hurt at the French Open, said on court.

The opening match on day two of the championships is traditionally reserved for the defending champion but with Simona Halep out injured, Barty was given the honour. She did not disappoint as she began her quest to emulate Goolagong, who like herself has indigenous Australian heritage.

Five-time champion Venus Williams, playing as a wild card in her 23rd Wimbledon, showed vintage form to beat Romania’s Mihaela Buzarnescu 7-5 4-6 6-3 and reach the second round.

The oldest woman in the draw at 41, Williams had not won a match since reaching the second round at the Australian Open in February but showed she was far from finished on her return to a favourite place.

The Court Three  clash of veterans, one of several held over due to rain on Monday, was the 271st victory of a remarkable Grand Slam career for Williams and, despite serving 10 aces, did not come easy.

The American powered to a 5-1 lead in the final set but then wobbled as Buzarnescu, 33, saved a match point and came back to 5-3. The Romanian failed to convert three break points in the final game, but saved another match point, before Williams made sure of victory at the third attempt.

If Court 3 was a step down from the Centre Court stage of old, Williams was happy to be back on the green grass of southwest London.

“I’m here to play on whatever court I’m put on,” she told reporters. “As long as I win on that court, that’s all I care about. Court Three is quite a nice court. I have a lot of great memories on that court, singles and doubles.

“To me it was like going home. Whatever happens happens. All good to me.”