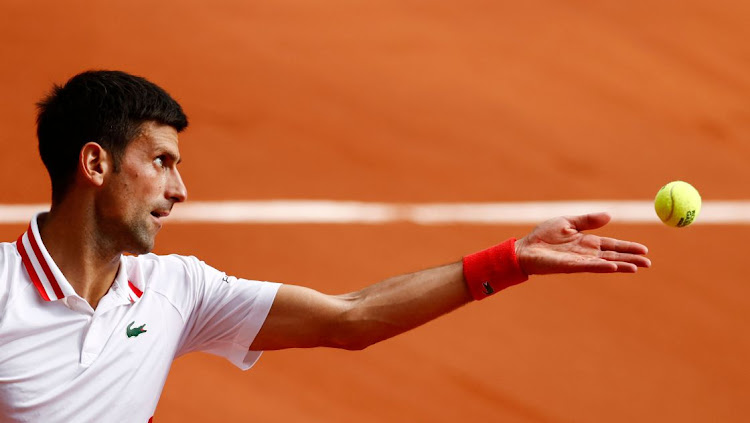 Serbia's Novak Djokovic in action during his fourth round match against Italy's Lorenzo Musetti on June 7 2021. Picture: REUTERS/CHRISTIAN HARTMANN

Paris — World No 1 Novak Djokovic survived a huge scare as he fought back from two sets down against teenager Lorenzo Musetti to reach the French Open quarterfinals on Monday, after his Italian opponent retired in the fifth set.

It was unclear exactly what happened to world No‌ 76 Musetti whose stylish game was threatening to send Djokovic to his earliest Roland Garros exit since 2009.

Having produced tennis of the highest calibre in two sensational sets, Musetti then lost the third set in 24 minutes and did not even get a point in set four until the fifth game as the match slipped away from him.

A relieved Djokovic went 4-0 ahead in the decider before Musetti decided he could not continue. It was an anticlimactic end to what was brewing up to be a seismic shock in a tournament full of surprises.

Musetti dropped serve early on but hit back when Djokovic made a backhand error and from then on went toe-to-toe with the 18-time Grand Slam champion who appeared unsure how to counter the all-court game of his young opponent.

Djokovic was 4-1 ahead in the first set tiebreak but Musetti produced two stunning single-handed backhand winners to close the gap and then carved out a set point when Djokovic dragged a forehand into the net at 5-5.

Musetti smiled ruefully when Djokovic saved that with a forehand flush on to the sideline. But the young Italian swiped away two forehand winners to take the opener. A rattled Djokovic blazed a forehand wide to surrender serve early in the second set but he quickly replied as Musetti’s concentration wavered.

Djokovic had to dig deep to save break points at 2-3 and 3-4 and eventually took the set into a tiebreak. A terrible misjudgement by Djokovic saw him leave an improvised lob from Musetti that landed on the baseline with the Serb bizarrely offering no shot.

When Musetti punished more Djokovic errors to move two sets ahead it seemed he was on the brink of a momentous victory. Djokovic briefly left the court and when he returned, he might have suspected Musetti had been replaced by a lookalike. He broke serve straight away and suddenly Musetti looked lost, making basic errors and appearing to lack energy.

Djokovic needed no second invitation to take advantage and lost only 14 points in levelling the match in a flash — the third and fourth sets lasted 46 minutes in total compared with the 75 minutes it took Musetti to win the superb opener. After that, there was no way back for Musetti.

‘It’s something I can’t control,’ says US Open champion
Sport
2 weeks ago