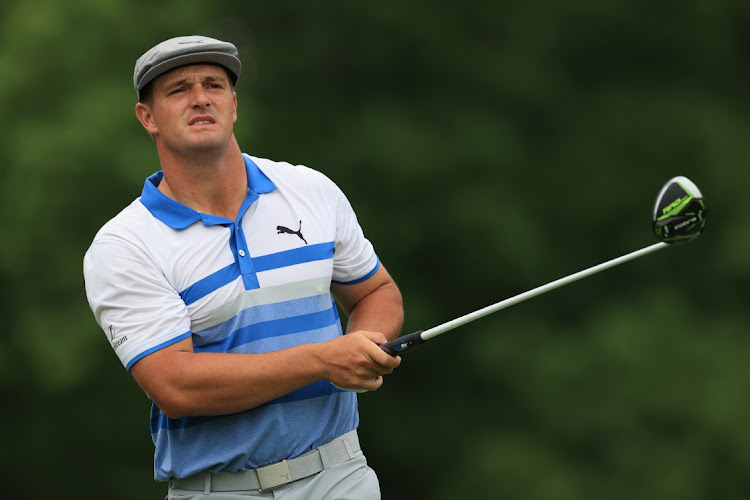 Bryson DeChambeau hits his tee shot on the 18th hole during the conclusion of the rain-delayed first round of the Memorial Tournament golf tournament in Dublin, Ohio, the US, June 4 2021. Picture: AARON DOSTER/USA TODAY SPORT

Bengaluru — US Open champion Bryson DeChambeau says his ongoing feud with Brooks Koepka might be something for the PGA Tour to handle if it escalates, adding his representative has already spoken to officials.

The bad blood between the pair has largely played out online but intensified at the Memorial Tournament on Friday when fans were removed from Dublin, Ohio’s Muirfield Village for heckling DeChambeau with his rival’s nickname “Brooksy”.

Koepka, who was not competing last week, said in a video on Twitter he would offer 50 cases of free beer to any fan whose time was “cut short” at the tournament.

Asked if he was surprised at how the matter had escalated, DeChambeau told reporters: “Yeah, I think that’s something the Tour needs to handle, it’s something I can’t control.

“I tried to take the high road numerous times and I think, from my perspective, I’ll continue to keep doing so and people are going to do what they want to do. So it is what it is.”

DeChambeau said his agent had spoken to PGA Tour officials without disclosing too many details about the conversation. He added he was not affected by the behaviour of fans.

“First off ... the fans were awesome today. They came out, supported me. Obviously you’re going to have people saying things, but again it doesn’t rile me up,” DeChambeau said. “... I love what’s been going on. I’ve had no issue with it whatsoever ...  I’d say tennis and golf are the only two sports where when you’re hitting a shot everybody’s usually quiet.

“If it comes out to a point where they’re affecting your swing ...  that’s a little over the line, but everything else, I don’t care.”

In golf, age seems not to matter, as winners have come in all shapes, size and vintage
Sport
3 months ago

Northern Irishman, coming off his first victory in 18 months, won the event at the South Carolina venue in 2012
Sport
4 months ago