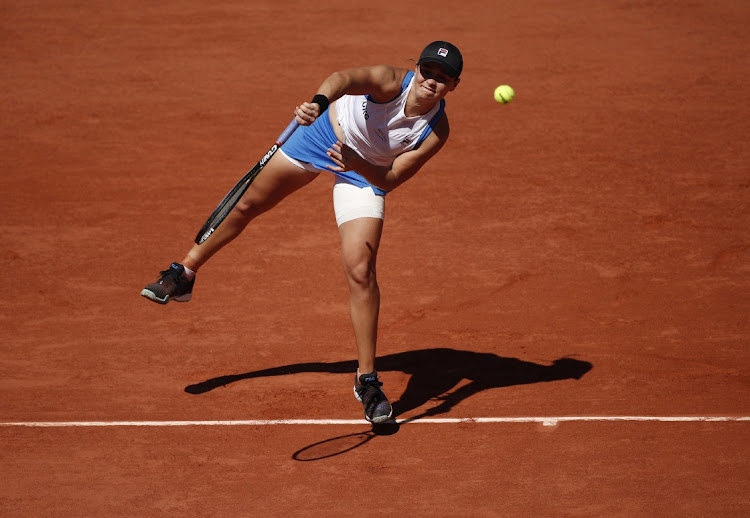 Australia's Ashleigh Barty in action during her first round match against Bernarda Pera of the US at Roland Garros, Paris, France, June 1 2021. Picture: REUTERS/GONZALO FUENTES

Paris — World No 1 Ash Barty fought through a hip injury and a tricky opponent in American Bernarda Pera with a 6-4 3-6 6-2 victory on her return to the French Open on Tuesday.

Returning to the Philippe Chatrier court for the first time since her maiden Grand Slam win in 2019, the 25-year-old Australian seemed to be cruising against the 70th-ranked Pera when she was up 5-2 in the opening set.

But an injury seemed to start bothering Barty, who skipped the clay court Grand Slam in 2020 amid the Covid-19 pandemic, as her movement appeared restricted.

“It’s going to be a little tough this week,” Barty told reporters. “I think over the weekend we had a bit of a flare-up through my left hip, which obviously just needed a bit of help today, needed some assistance to try and release it off as best I could.

“But, no, I think we were able to fight through, able to give ourself a chance to play again the next round.”

Barty managed to close out the opening set in her first meeting against the American but Pera’s confidence grew and she managed to level the match. The Australian, who retired from the quarterfinals in Rome last month due to problems in her right arm, improved after receiving medical treatment on her back before the deciding set.

She then broke Pera’s serve twice to close out the win in two hours and set up a second-round meeting against either Magda Linette of Poland or French wild card Chloe Paquet.

“I’m not going to hide behind the fact I’m not quite 100% but I can guarantee that I will go out there with the right attitude every day and be really accepting of that and give it a crack no matter what,” she added.

“I just have been working with my team as best that I can and trusting them. Like I said, they know my body back to front, inside and out, and they know I have full trust in them.

“We’re here, we’re fighting, we’re in with a chance and that’s all we can do,” she said.

Petra Kvitova has withdrawn from the tournament after injuring her ankle in a freak fall while performing her post-match media duties on Sunday, the 11th seeded Czech player said in a statement.

Two-time Wimbledon champion Kvitova, who reached the semifinals at Roland Garros in 2020 and 2012, beat Belgian qualifier Greet Minnen 6-7(3) 7-6(5) 6-1 in her opening match of the tournament and hurt her ankle shortly afterwards.

“It is with great disappointment that I announce my withdrawal from Roland Garros,” the 31-year-old Kvitova said on Twitter on Tuesday. “During my post-match press requirements on Sunday I fell and hurt my ankle.”