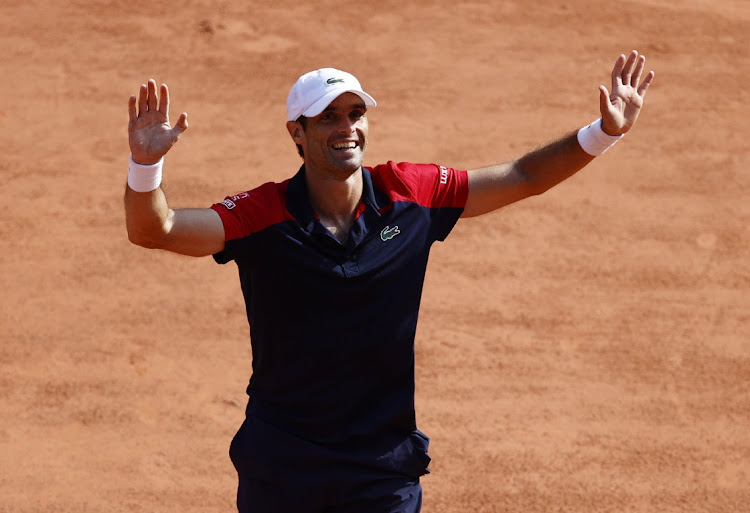 Paris — Two-time runner-up Dominic Thiem was knocked out in the first round of the French Open by Spanish journeyman Pablo Andujar 4-6 5-7 6-3 6-4 6-4 in the first big upset of the clay court grand slam on Sunday.

It first seemed that Andujar’s win against 20-time grand slam winner Roger Federer in Geneva earlier in May would count for nothing. But Austrian Thiem’s game began to unravel after a dominant start on court Philippe Chatrier.

Thiem, who reached the final in Paris in 2018 and 2019, had never lost in the opening round at Roland Garros, but that prospect grew as Andujar went for his shots and unsettled his 27-year-old opponent.

Thiem broke back after conceding a break in the first game of the decider, but Andujar kept on piling on the pressure with deep strokes and broke again for 3-2.

The 35-year-old, ranked 68th in the world, then held serve throughout to claim victory after nearly four-and-a-half hours after Thiem made a total of 66 unforced errors.

Thiem, who took a break to “reset” his game earlier this season and also battled injuries, entered the tournament short of confidence and Sunday’s clash with Andujar showed he had yet to rediscover his touch even though he had reached the semifinals at the Madrid Masters this month.

“I was not struggling at all with my motivation but the game was just not there today,” he said. “Like all the shots are missing power. They are not accurate enough. I’m moving not well enough, so everything in my game there are some percents missing.”

Andujar, on the other hand, was on a roll after beating Federer on the Geneva clay. “I believed in myself because I played well [against Federer] two weeks ago. Usually being drawn against Thiem is a bad draw,” the Spaniard said.

“Winning today against a player like him is like a gift, even if he has not been at his best recently, because I’m 35 and I don’t know how long I’m going to be playing for. Beating Roger was an even bigger gift. I feel like Father Christmas came to my home.”

Japan’s Naomi Osaka could be thrown out of the French Open if she continues to boycott post-match news conferences at the tournament, the board of grand slam tennis tournaments said on Sunday.

Osaka, who was fined $15,000 for skipping the news conference after her first-round victory at Roland Garros, could also face suspension from other grand slam tournaments, the board added.

The four-times grand slam champion said earlier this week she would not face the media during the French Open, citing mental health reasons.

“We have advised Naomi Osaka that should she continue to ignore her media obligations during the tournament, she would be exposing herself to possible further Code of Conduct infringement consequences,” the board of grand slam said in a statement.

‘He’s just a synopsis of greatness and class and amazing and really changed the game,’ 23-times Grand Slam winner says of the Swiss maestro
Sport
3 weeks ago