Confident Serb hopes to reach his peak at Roland Garros 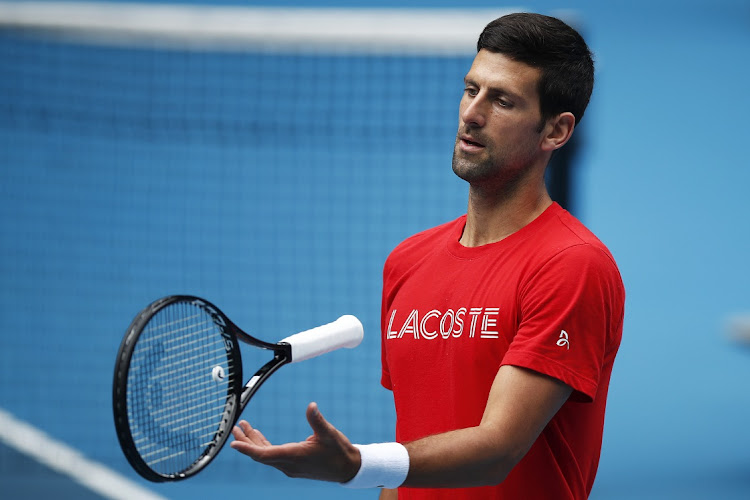 Novak Djokovic of Serbia catches his racquet during a practice session at Melbourne Park on February 1 2021 in Melbourne, Australia. Picture: GETTY IMAGES/DANIEL POCKETT

Berhampore — Novak Djokovic was disappointed to fall at the final hurdle against Rafa Nadal at the Rome Masters on Sunday but the world No 1 said his level of play last week has filled him with confidence about his chances at this month’s French Open.

The Serbian, who will turn 34 this week, came back from a set and a break down to beat world No 5 Stefanos Tsitsipas in his rain-hit quarterfinal on Saturday before returning to court later in the day to overcome Lorenzo Sonego.

But he fell 7-5 1-6 6-3 to his great rival Nadal on Sunday. “I was happy to play him because of the fine-tuning for Roland Garros ... That doesn’t get bigger of a challenge on clay than playing Rafa in finals,” Djokovic told reporters, adding that he was pleased with the fight he showed.

“Of course I’m disappointed not to win it, but at the same time I’m pleased with the level of tennis that I managed to find in the later stages of this tournament.

“Going into Paris brings me good sensation. I actually now started to feel like I actually want to feel on clay. So I think if I manage to play the way I played last night and today, I have a good chance to go all the way in Paris.”

Djokovic will next play a tournament at home in Belgrade in the week before the French Open kicks off on May 30 and will hope to arrive in Paris with a few more matches under his belt.

“I have to obviously keep the momentum going I feel with the quality of tennis,” he said. “Do more training, of course, and few more matches. I think I’m on the right way.

“Actually, last couple days really gave me the confidence boost for the clay. I found the game. So now I just have to maintain it, that level, and peak in Paris.”

Devlin Brown at the water cooler: Does exercise increase your grip strength?