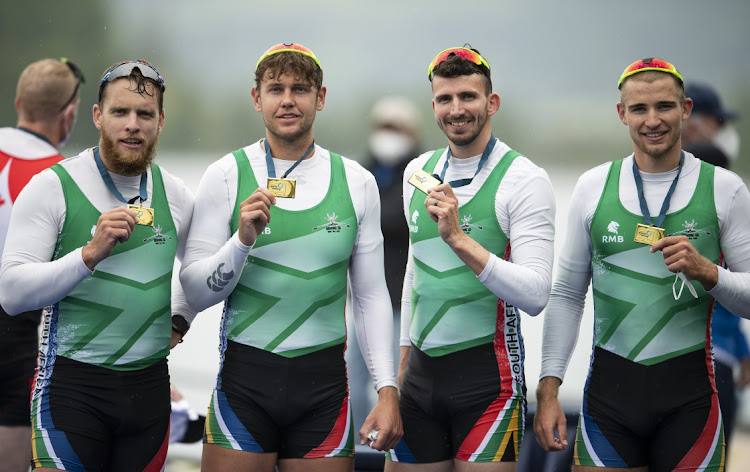 SA will field two rowing crews at the Tokyo Olympics after the men’s four powered to victory at the qualifying regatta in Lucerne on Sunday.

Hopes of getting a third boat to Japan crashed with veteran Kirsten McCann and Nicole van Wyk being eliminated in the semifinals of the lightweight women’s double sculls.

Canada‚ second in 06:07:84‚ took the other qualifying position while third-placed France missed out altogether in 06:10.24.

This regatta was not just about winning air tickets to Tokyo‚ but also about winning medal contender status for the Olympics; victors here take form and momentum into the Games and history shows they are often in the mix for the podium.

Brittain and Smith had qualified what had been the pairs boat at the 2019 world championships‚ but coach Roger Barrow‚ with four rowers competing strongly for those two spots‚ decided to try out the four as his premier boat.

The four will stay on in Lucerne to compete at the second World Cup event next weekend‚ along with the new pair combination of Jake Green and Luc Daffarn.

Green is the sole survivor of the SA men’s four from 2016‚ which also won the qualifying regatta only to suffer a heartbreaking fourth place in the Rio final.

SA had five Olympic crews back then‚ and all made the A-finals in Brazil‚ though they achieved only one medal in the men’s pair through Brittain and Shaun Keeling.

There were two fourth places‚ the other being Smith and James Thompson in the lightweight men’s double sculls.

Rowing is the only sport outside athletics and swimming to have won multiple Olympic medals for SA since readmission‚ with three podium finishes at the past four Games.

The lightweight men’s four took gold in London while the men’s pair took silver in Rio‚ bronze at Athens 2004 and fifth at Beijing 2008.

Apart from trying to increase the medal haul in Tokyo‚ Smith and Brittain will also bid to become the first SA rowers to win second Olympic medals.

The men’s four was in fine form throughout the weather-hit regatta in Lucerne‚ winning all three of their races.

The semifinals and finals were held on Sunday‚ within three hours of each other‚ because of forecasts of worsening weather conditions. The finals had initially been scheduled for Monday.

The four were yellow-carded for being 10 sec late in connecting to the start of the semifinal‚ which got under way at 9.25am‚ but they finished ahead of runner-up Austria by more than a second.

At 11.50am they were back on the water‚ dealing with the Canadians‚ who had gone unbeaten in their heat and semifinal.

McCann and Van Wyk had both struggled with back injuries in 2020 and early this year‚ though they insisted they were in good form coming into this regatta.

The men’s heavyweights had enjoyed huge competition for seats‚ while the two of them had not had the same luxury‚ being the only contenders for the boat since the end of 2019.

But it is still a bitter pill‚ especially for McCann‚ one of SA’s top sportswomen across all codes. She won the 2017 world championship gold in the lightweight single sculls‚ a non-Olympic event‚ and took bronze in the 2015 world championships with Ursula Grobler.

The two of them ended a disappointing fifth at the Rio Olympics.

The only trophy missing from McCann’s cabinet is an Olympic medal.

Prime Minister Yoshihide Suga has staked his  administration on pulling off a successful Tokyo Olympics, even though the games are persistently ...
Sport
1 month ago