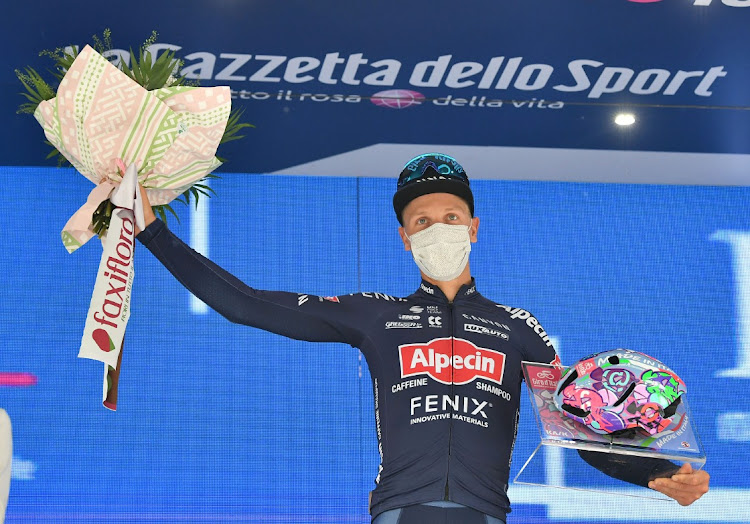 Tim Merlier of Belgium celebrates on the podium after winning the second stage of the Giro d'Italia, in Stupinigi, Italy, May 9 2021. Picture: JENNIFER LORENZINI/REUTERS

Novara — Belgian Tim Merlier won the second stage of the Giro d’Italia, a 179km ride from Stupinigi to Novara, with an impressive sprint to give his Alpecin Fenix team a victory on their first appearance in the race on Sunday.

Merlier took the early lead in the final straight and he never looked in danger as he beat Italians Giacomo Nizzolo and Elia Viviani.

Dutchman Dylan Groenewegen, who is making his comeback to racing after a nine-month suspension for causing Fabio Jakobsen’s horror crash at the Tour of Poland last August, was fourth.

“I’m very happy with this victory in my first sprint at a Grand Tour. I knew it was important to be well-positioned at the last roundabout,” said Merlier.

“When I came out of it I only thought of going faster and faster afterwards. I went from far out, at about 250m. I still had enough to finish it off. My preparation at altitude has been good.”

Organisers paid tribute to Belgian Wouter Weylandt, who died in the race 10 years ago, with a painted 108 bib number — the one he was wearing when he crashed in the descent of the Passo del Bocco on May 8 2011.

Monday’s third stage is a 190km undulating ride from Biella to Canale.

Who would have thought it would take more than a year for supply to catch up with demand?
Sport
4 months ago
Next Article