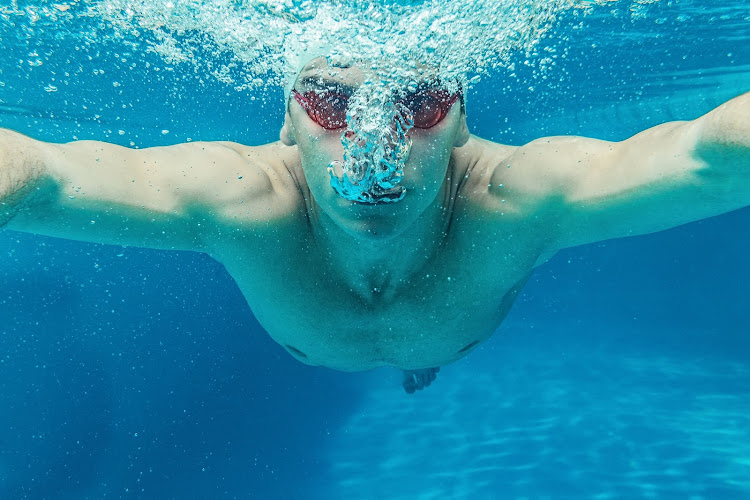 Gqeberha — In a spectacular end to the SA Invitational Aquatics Championships 16-year-old Pieter Coetzé confirmed his place in the squad for the Olympics after dipping under the qualification time in the final event on Monday.

Coetzé swam the opening backstroke leg of the men’s 4x100m medley and the Gauteng swimmer clocked a 53.62 to book his spot at the Tokyo Games.

Coetzé‚ who wore a big smile and saluted his teammates cheering from the stands‚ said the feeling was difficult to describe.

“It was very important to stay calm‚ especially after not making it the other day. That could have been the end for me if I went the wrong way mentally but I had my amazing coach with me‚ who helped me‚ so I am glad I could pull through‚” he said.

“I didn’t even think about the race until I got down here [from the stands]. The nerves were there‚ but because it’s the fourth time I am trying‚ I’ve kind of got used to them‚” he said.

National 50m freestyle record holder Emma Chelius said her objective was to try to get under the Olympic qualification time as early as possible as she was crowned national champion.

In what was an otherwise quiet final day of the championships‚ the KwaZulu-Natal swimmer set the heats alight for a new national mark in addition to securing Olympic qualification in the process.

Chelius said she just wanted to execute every step of the race. Despite slowing to 25sec flat in the final on Monday evening‚ her performance in the morning heats had her looking on in disbelief as the board showed 24.72‚ taking 0.23 of a second off the previous record.

“My goal coming into the meet was to hit the time as early as possible‚ obviously you can dream and scheme‚ but achieving it in the morning was a blessing‚ because it took all the pressure off this evening’s swim‚” she said.

Chelius was a member of the women’s 4x100m freestyle team‚ alongside Aimee Canny‚ Erin Gallagher and Rebecca Meder‚ who swam a 3:40.29‚ a national and continental record‚ to qualify for the Olympics on Saturday evening.

Olympic 2016 silver medallist will compete in the  100m and 200m butterfly events, and 200m freestyle
Sport
5 months ago