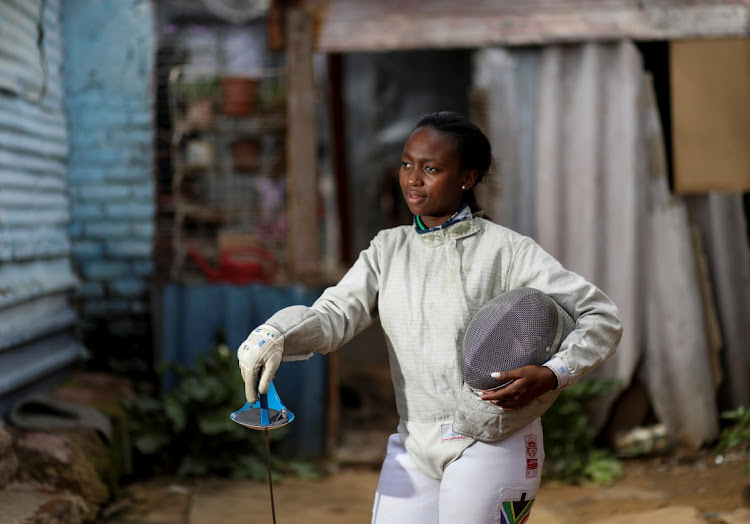 It was in a hotel parking lot in the middle of the coronavirus hard lockdown in 2020 that fencer Nomvula Mbatha realised how powerful her Olympic dream is‚ and how she will stop at nothing to achieve it.

At that parking lot‚ as her dreams of representing SA at the Tokyo Olympics took yet another unexpected turn — this time through a global pandemic — Mbatha made a decision she admits left her both nervous and excited.

Vodacom will support Mbatha financially to travel to the Olympic zonal qualifiers in Cairo, and assist with the coaching sessions she needs for her preparations‚ and the new attire required as standard international competition kit. The zonal qualifiers will be held from April 18-24.

“I’m also just so grateful for the support from Vodacom. Since all the media exposure and their help‚ I’ve had so many people asking me about fencing and wanting to get involved. It’s also brought more exposure for the Soweto Fencing Club‚ and my teammates there are just as grateful for this.”

The hard lockdown was one of many obstacles Mbatha had to overcome. “It was tough to deal with and I wasn’t happy about it when the lockdown happened and everything was postponed‚ but I decided to turn it into a positive‚” she said.

At the time Mbatha was busy with her studies through the FIE (International Fencing Federation) to become a coach.

“I was based at the Sierra Hotel in Randburg. I was there with other fencers from Botswana‚ Kenya‚ Egypt and Mauritius. When the lockdown happened‚ the hotel was empty. So I said to them‚ we’re going to practice in the hotel parking lot.

“There were no cars, so it was perfect. We fenced against each other in the parking lot. I used the time to train harder and focus more on my studies‚” she said.

“We were up at 6.30am every morning‚ and by 7am we would go running. Then we’d come back and fence in the parking lot. After that we’d go back to our rooms to rest‚ and in the afternoon we’d go for a run again.”

She completed her studies and is now‚ at the age of 23, the first black female fencing coach in SA. A career in coaching has been another part of her dream.

“The first part of my dream is to go to the qualifiers‚ win gold and make it to the Olympics‚” she said. “And then I want to coach and get more women involved in fencing.”

Mbatha’s journey is already an inspiration. While attending Ekuthuleni Combined School in Diepkloof, Soweto‚ she discovered that she wasn’t good at netball and decided to try a new sport that had been introduced at the school. That sport was fencing.

Initially her parents were not convinced by their daughter taking part in a rare sporting activity they deemed to be “dangerous”. The sport was far from popular in the townships but her determination and commitment were enough for them to eventually give her their blessing.

“When I told my parents I was doing fencing‚ they had no idea what I was talking about. Then they saw it and said it was too dangerous. But now they are comfortable with it,” she said.

“They are very proud of what I’ve achieved. But I was never a natural. I had to train harder than others. But I saw that the more training I did‚ the better my results. So that’s been my approach. To always be positive and train hard.”

Meeting to honour victims of air disaster 33 years ago

Many of them were late bloomers and near champs, and a number of women swung like the best of them
Sport
1 week ago