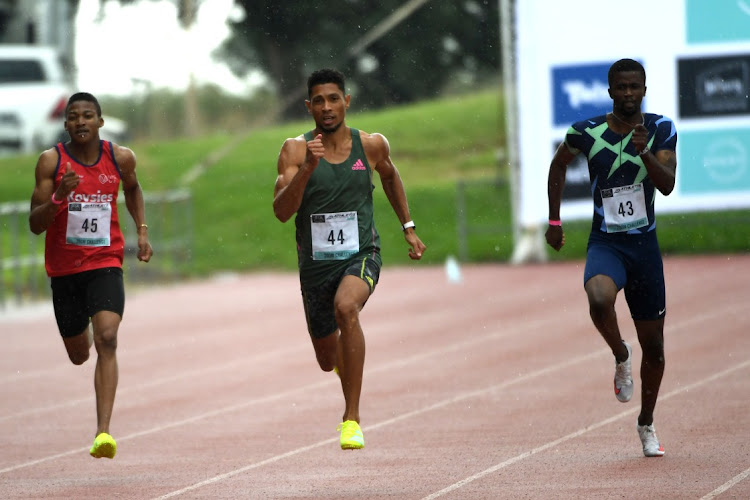 Wayde van Niekerk clenched his fist as he edged Akani Simbine to win the 200m shoot-out of the second Athletix Invitational at a wet Ruimsig on Tuesday. That signalled the confidence boost his victory over Simbine‚ Anaso Jobodwana and Botswana veteran Isaac Makwala had given him.

Van Niekerk’s 20.11sec time was negated by a 2.11m-per-second tailwind that carried a thundershower into Roodepoort‚ otherwise he would have taken second spot on the world list so far for 2021.

But his effort still injected a healthy dose of self-belief as he held his silky smooth form to hold off Simbine (20.21).

This race was dominated by Van Niekerk and Simbine who accelerated like lightning and by the time they exited the bend they were far ahead.

“This definitely gave me confidence I didn’t have before‚” said Van Niekerk. “It’s one thing training well‚ but it’s a different thing executing it against such a quality line-up‚ guys I have the world of respect for.

“It would have been nice to have the [SA] record-holder [Clarence Munyai‚ who is injured] here to see where we are ... I still saw a lot of room for improvement and growth.”

Even with the wind assistance‚ this was Van Niekerk’s best performance since his comeback from a knee injury he suffered in 2017.

Van Niekerk has not had the best of racing conditions since 2020‚ dating back to Switzerland when he struggled with nerves in a 400m race.

“I’m growing within these challenges. I knew that this is the perfect race for me to climb out of that comfort zone‚ that anxiety that comes with being out of the sport for so long.”

Van Niekerk said he was still waiting to hear when he could leave for the US to join up with his new coach‚ Lance Brauman‚ in Florida. He has been training on the new programme for nearly two months‚ he added.

“The programme is definitely something new but it’s something I’ve adjusted to quite well. My next step is to get myself to the US and get used to the new circumstance‚ new challenge that awaits me. I’m excited about that‚” said the Olympic 400m champion.

But he doesn’t know when his new coach will have him make his season’s debut in the one-lap event‚ where he is yet to qualify for the Tokyo Games.

“I’m excited about how my training’s going. This is my first month-and-a-half of non-stop training since the injury. It looks like my body’s adjusting quite well to the new programme.”

Simbine‚ who won the 100m last week and took the 100m Gauteng North title after three rounds of racing on Saturday‚ said he was happy with his performance.