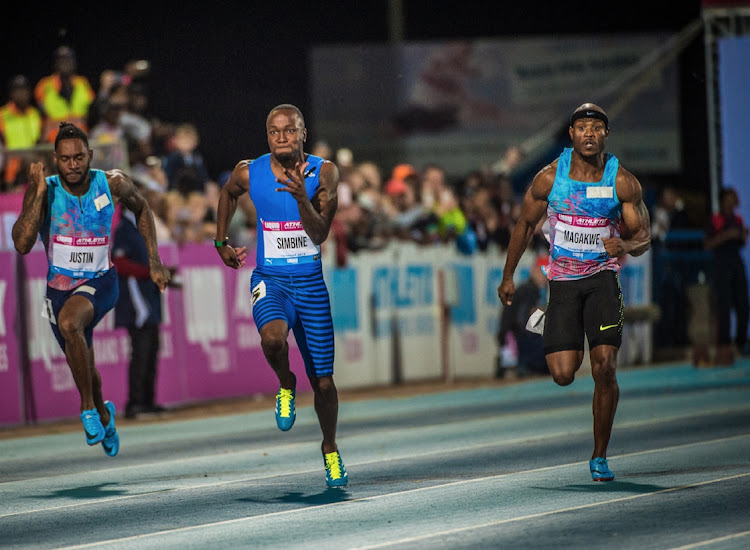 Akani Simbine looked comfortable as he cruised to victory in the 100m at the Athletix Invitational meet at Ruimsig in Johannesburg on Tuesday‚ clocking a wind-assisted 10.00sec.

But Simbine played down his performance with an “it’s okay” afterwards. “I’m just happy to be out racing‚ the body’s a bit rusty but that’s to be expected.”

The 2.1mps wind measurement robbed him of the world lead‚ but he will get another crack in Pretoria at the Gauteng North championships on Saturday.

Simbine‚ who has been in the top four or five of the world since the 2016 Rio Olympics‚ is targeting a podium finish — or maybe two or three — at the Tokyo Games.

“After all the hard work and the years of finishing fifth and fourth‚ I’m looking to take my opportunity‚” said the sprint ace‚ who will also compete in the 4x100m relay and maybe the 200m.

“I just have to convince coach [Werner Prinsloo] to let me also do the 200m at the Olympics.”

Asked what sort of time he would have to do to persuade Prinsloo‚ Simbine smiled and replied: “You’ll see.”

The greatest Covid-related uncertainty for SA athletes is when they will be able to get to Europe for the northern hemisphere season.

Simbine and Antonio Alkana‚ who normally camp in Italy with Wayde van Niekerk‚ are hoping to get there sooner rather than later.

“As soon as we can leave‚” said Alkana‚ winner of the 110m hurdles in 13.69. That could mean three to four months away from his wife and child‚ but Alkana said they are used to such lengthy separations.

Rio silver medallist Sunette Viljoen‚ winner of the women’s javelin in 58.00m‚ said she was happy to be competing pain-free after years of suffering from back issues‚ but she too is uncertain about what the European season might look like as she looks to qualify for Tokyo.

Cheswall Johnson took the long jump in 8.14m and Kyle Blignaut won the men’s shot put in 20.85m‚ though he is targeting a mid-21 for later in the season.

Botswana dominated the 400m‚ with Ditrio Nzamani winning the men’s race in 45.27‚ though both Lythe Pillay and Zakithi Nene went under 46sec‚ a good omen for SA’s 4x400m relay hopes.

Veteran star Isaac Makwala clocked only 46.82‚ but he is no stranger to slow times at the start of a season.

Amantle Montsho was the fastest in the women’s one-lapper in 53.78‚ with countrywoman Oratile Nowe the only other competitor to break 54sec.