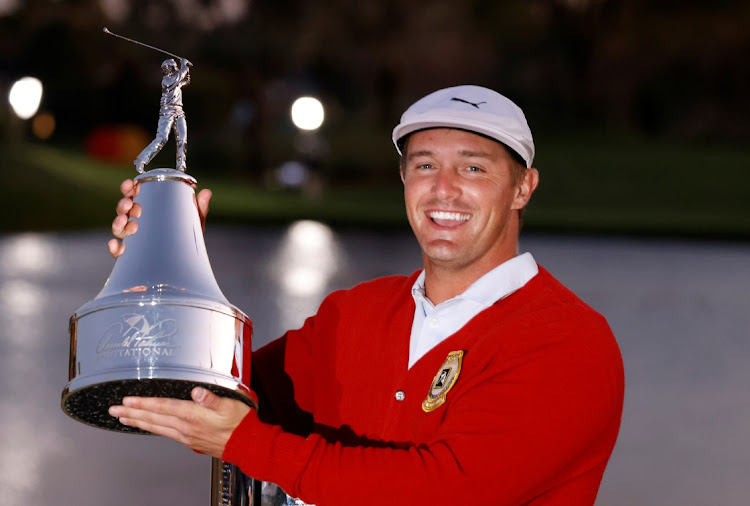 Bryson DeChambeau gathered the crowds with his long drives, while using his putter to seal a one-shot victory on Sunday in the Arnold Palmer Invitational near Orlando, Florida.

DeChambeau made a 1.5m par putt at 18 to win it, finishing at 11-under-par 277 in front of a limited crowd at the Bay Hill Club and Lodge, just in front of England’s Lee Westwood, while Canada’s Corey Conners finished alone in third place at eight under.

DeChambeau’s 1-under 71 in the final round matched the low round of the day with Andrew Putnam and England’s Matt Wallace. They were the only three in the field to break par during a sunny but windy final round.

The victory was DeChambeau’s first since a dominating run to the US Open title in September. And it was inspired by a text from Tiger Woods before the final round began.

“I got a text from Tiger this morning and he had obviously done really well here and was very instrumental in Mr Palmer’s life as Mr Palmer was to Tiger,” DeChambeau said, referencing the eight Arnold Palmer Invitational titles won by Woods, who was involved in a serious car crash on February 23.

“We just talked about keep fighting no matter what happens and play boldly like Mr Palmer said.”

While low scores were hard to come by, the conditions did allow for DeChambeau to take a gamble with his tee shot at No 6 for the second consecutive day.

Instead of following the fairway along a lake on the par-five hole, DeChambeau took a short cut over the water with a breeze mostly in his favour. His 344m drive found a bunker 80m from the pin, changing the dynamics of what is regularly a 517m hole. His second shot missed the green, but he scrambled for a birdie four to reach 11 under and found himself alone in the lead when Westwood bogeyed the seventh hole.

Westwood tied DeChambeau again at 11 under with a birdie at No 12, but fell out of the top spot with a three-putt bogey at No 14. DeChambeau made an 11m putt for a birdie at No 4, a 15m putt for par at No 11 and a knee-knocking 1.2m par putt at 17 with the pressure on after he blasted his birdie putt past the hole.

“It’s beyond my wildest dreams [to win] Mr Palmer’s event,” DeChambeau said. “I came here as an amateur, he gave me an invitation and I loved this golf course the minute I arrived and I love the atmosphere and I love the fans.”

The 47-year-old Westwood was unable to gain any momentum, shooting a 1-over 73 on Sunday after taking a one-shot lead through three rounds. Conners shot a 2-over 74 in the final round. “I thought we had a really good battle,” Westwood said about playing the final round with DeChambeau.

“It was never really more than [a one shot difference] all day and there were tough conditions out there and it wasn’t going to be a day where anybody was going to shoot 68 or 67. It was a day for playing sensible and hanging on and grinding out the pars.”