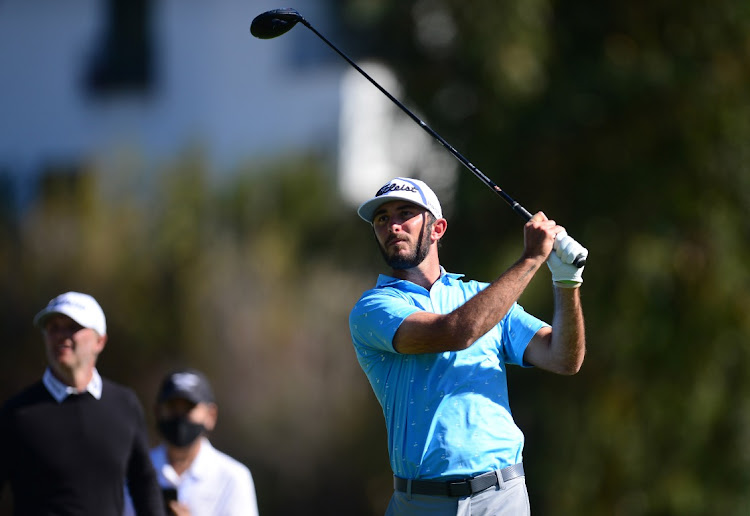 Max Homa hits from the second hole tee box during the final round of The Genesis Invitational golf tournament at Riviera Country Club on February 21 2021. Picture: USA TODAY SPORTS/GARY A. VASQUEZ

Los Angeles — Hometown advantage propelled Max Homa to victory at the Genesis Invitational at Pacific Palisades, California as the Los Angeles-area native got the best of Tony Finau on the second playoff hole on Sunday.

Born in nearby Burbank, Homa grew up just north of Los Angeles in Valencia and was a frequent visitor to Riviera Country Club in his youth to watch the tournament he won on Sunday in dramatic fashion.

It was his second career victory after the Wells Fargo Championship at Quail Hollow Club in Charlotte, North Carolina, in 2019. After Homa scrambled for par while up against a tree at No 10 to match Finau on the first playoff hole, he delivered a two-putt par at the par-3 14th hole.

Finau found the bunker off the tee and failed to get up and down, missing a 10-foot par putt to give Homa the victory. Homa, who received the winner’s trophy from tournament host Tiger Woods, had a chance to take the tournament on the 72nd hole, but his 3-foot birdie putt on 18 for the victory missed on the left edge of the cup and led to the playoff.

“I have been watching this tournament my whole life, and it is why I fell in love with golf,” Homa said. “Tiger is another reason I’m into golf. I had good feelings this week and I have been playing great.”

Homa was two shots off Sam Burns’ lead when the final round began and posted a bogey-free 5-under 66 (12-under, 272 total), only to be matched at 12 under by a 64 from Finau, who had eight birdies and a bogey. After birdies at 16 and 17, Finau finished with a par at 18 after his approach shot got hung up in the left rough just outside the fringe.

It was also Finau’s third consecutive top-five finish, all in California, after finishing fourth in The American Express at La Quinta and tied for second in the Farmers Insurance Open at San Diego.

“Right now, I’m disappointed,” Finau said. “I didn’t execute the shot I was trying to hit on the last [playoff] hole, and it ended up biting me in the butt. But I shot 64 today on a day when I needed to just get into a playoff. As I look back on the week, there will be a lot to grow from.”

Burns fell out of the lead for the first time since Thursday’s opening round when he found a fairway bunker at the par-4 15th hole and finished with a bogey. He slipped to 10 under for the tournament as Finau and Homa vaulted into the lead.

Burns, who has not won on the PGA Tour, was trying a wire-to-wire victory but went 2-over par over his final seven holes on Sunday. He needed a birdie at 18 to join Finau and Homa in the playoff, but hit his approach shot, missed the green and his chip fell short of the hole. Burns finished alone in third place at 11-under, while Australia’s Cameron Smith (67) finished in fourth place at 9-under.

Recovering from further back surgery, golf legend says he aims to get through the next day and start progressing
Sport
3 months ago