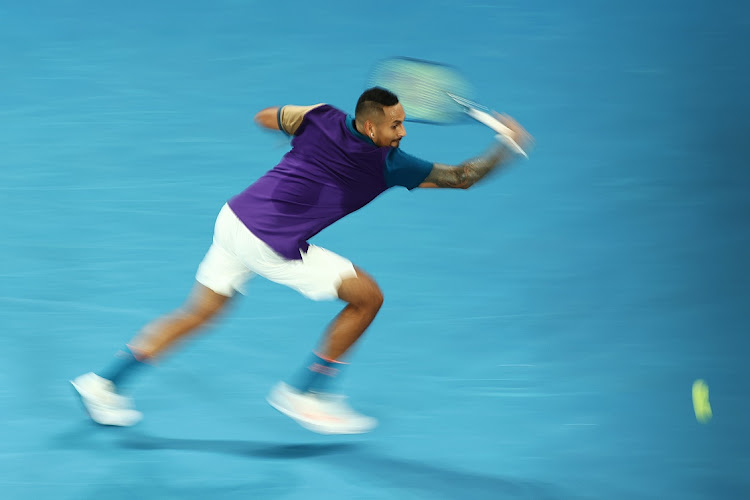 Nick Kyrgios of Australia plays a backhand in his Men's Singles second round match against Ugo Humbert of France during day three of the 2021 Australian Open at Melbourne Park on February 10 2021 in Melbourne, Australia. Picture: GETTY IMAGES/MARK METCALFE

Melbourne — Nick Kyrgios fed off a febrile atmosphere to save two match points on his way to a 5-7 6-4 3-6 7-6(2) 6-4 comeback victory over Frenchman Ugo Humbert in the second round of the Australian Open on Wednesday.

The mercurial Australian rarely sticks around for the second week of his home Major but his early round matches on his favourite John Cain Arena court are guaranteed entertainment. Despite the restricted crowds and disappointing turnout over the first three days of a Grand Slam defined by the Covid-19 pandemic, Wednesday night proved no different.

Roared on by a crowd making up in passion for what they lacked in numbers, Kyrgios scrapped his way back into the contest time and again to secure a third-round date with US Open champion Dominic Thiem.

He triggered bedlam when he dug deep to save Humbert’s match points in the fourth set and proceeded to even up the contest by dominating the tiebreak. There were also the extras that showman Kyrgios brings to the court — an underarm serve, some exquisite shot-making and a running row with the umpire over net cord calls.

A ball fired off his racket in one moment of frustration hit the umpire’s chair and cost him a point but there was to be no denying the 25-year-old. The crowd exploded one final time after nearly 3½ hours when Humbert sent a backhand return sailing wide of the line.

“I don’t how I did that, honestly, that is one of the craziest matches I’ve ever played,” said Kyrgios. “It was a strange match. If you guys were inside my head, there were some dark thoughts in there.

“It’s my career, I live to fight another day and hopefully I can continue to play tennis in front of you guys,” he added, to another huge round of applause from the crowd.

Naomi Osaka dreamt that she would lose her second round match but the reality was a comfortable 6-2 6-3 victory over Caroline Garcia on Wednesday.

Garcia was unable to muster up a single breakpoint over the contest as the Japanese third seed put in a rock-solid performance punctuated with 10 aces on Rod Laver Arena.

“Going into this match I was really nervous and I had a bad dream about it,” Osaka told reporters. “For me, my dreams are very telling of the future. Like, usually I have dreams and they come true. Last night I had a dream that I lost this match, and I really didn’t feel good about it.”

Frenchwoman Garcia, once ranked fourth in the world but now languishing at 43rd, can be a tricky opponent whose aggressive baseline game has helped her to six wins over top five players.

Osaka said that where she might once have kept it to herself, she had discussed the dream with her team and that had helped her approach to the match. “I just thought that I’m not able to control what she’s going to do, and I can only control what I’m going to do,” she said.

Novak Djokovic’s aura of invincibility at Rod Laver Arena wavered under the pressure of Frances Tiafoe but the Serbian rose to the challenge to claim a tough 6-3 6-7(3) 7-6(2) 6-3 win and reach the third round.

The double-defending champion has rarely been tested so early at his favourite Grand Slam but he had his hands full against American Tiafoe, whose sparkling tennis revived memories of his exhilarating run to the 2019 quarterfinals.

“Very tough match,” said a relieved Djokovic on court, his voice faint and hoarse from the battle.

Serena Williams said she played better when she was not thinking quite as much after reaching the third round for the 19th time with a 6-3 6-0 victory over Nina Stojanovic.

The American needed to find her best game at times in the first set against a spirited Serbian 15 years her junior who was playing in her fourth Grand Slam. Williams ramped up her serve to see off the danger before putting the pressure back on her opponent with some booming service returns, running out a comfortable winner.

“I wasn’t thinking so much in the second set,” the 39-year-old said on court. “I think sometimes ... even with my serve, I overthink it. When I don’t think about it and I’m just like, whatever, it goes in. But that’s clearly not the way to do it.”