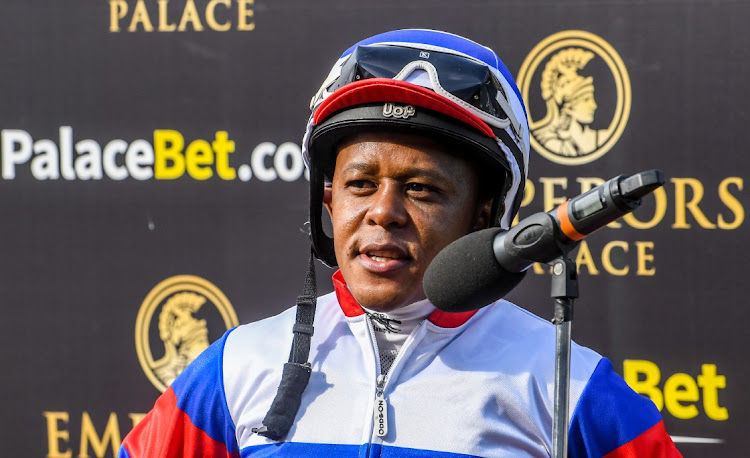 Jockey Muzi Yeni will have a bounce in his step as he arrives at the Vaal on Monday after his second success in the grade 2 Peermont Emperors Palace Charity Mile in the space of three years.

The 33 year-old is often a major player in big races — he finished a close second on Got The Greenlight in the 2020 Vodacom Durban July, and at Turffontein on Saturday he brought back memories of his 2018 win on Coral Fever.

This time Yeni was aboard Brett Crawford’s raider Hudoo Magic and he always believed his mount had a winning chance. He said: “I considered him to be the best handicapped horse in the race. I thought the pace would be a lot faster, but he still found a finish.”

Crawford was at the city track to see the Aussie import notch the most important win of his career. The Choisir gelding was overlooked by most pundits as he had not won for some time and had finished last in the Darley Arabian at Greyville on Champions Cup day in August.

The horse Hudoo Magic beat was his former stablemate Charles who now rates a serious contender against Summer Pudding in the Summer Cup. A R6m purchase as a yearling, the son of Trippi had a frustrating time with Crawford but a change of province seems to have worked the trick.

Sean Tarry’s hoodoo in the Charity Mile continued — the champion trainer is yet to win the race — and his best finisher was fourth-placed Tree Tumbo whose performance will have delighted owner Michael Javett.

In the ante-post market during the week, there was support for Cornish Pomodoro and Tierra del Fuego but they never got a blow in and were both beaten three lengths.

MK’s Pride, stablemate of Riverstown, fared much better taking top honours in the R900,000 Ready-To-Run Cup with a gutsy victory over the favourite War Of Athena. In the post-race interviews, connections put the victory down to God’s support.

Interestingly, MK’s Pride, a son of Willow Magic bred at Summerhill Stud, clocked a fractionally faster time for the Turffontein 1,400m than Malmoos in the Graham Beck Stakes.

It seems bookies were determined to take on Malmoos as — despite a seriously impressive performance on his second start — they were prepared to offer evens to anyone who wanted to back the Captain Al colt.

Trainer Mike de Kock seemed satisfied with Malmoos’s win in the post-race interview, but it was a surprise that 40-1 chance Catch Twenty-Two (second last in the Premiers Champion Stakes) got within two lengths of the winner.

De Kock had another successful meeting capturing the grade 3 Starling Stakes with his Silvano filly Due Diligence. The filly’s full-brother, Tozzetti, was bought by Suzette Viljoen for R625,000 at the National Yearling Sales in July.

Yeni has a ride in every race on Monday’s eight-event programme at the Vaal and he will be looking forward to partner the De Kock inmate Jamaheery for the first time in the seventh race.

As this Dynasty filly recently won a Work Riders event it is difficult to judge how good she is at this stage of her career, but she could earn a place cheque behind impressive debut winner Fantastical and St John Gray’s consistent filly Ululate.

Shock as Pettigrew pulls Anything Goes out of big race

Gary Player hopes for racing success on his 85th birthday

Close friends square up for clash in Ready-to-Run Cup

Close friends square up for clash in Ready-to-Run Cup