BMX trick rider Murray Loubser on a small screen near you 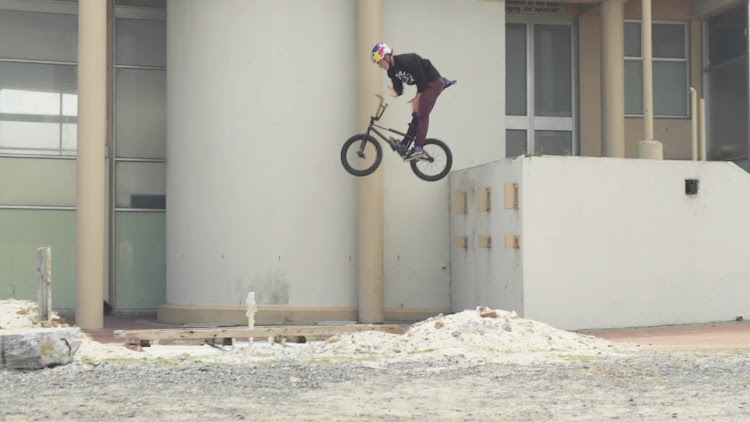 Cape Town-based BMX star Murray Loubser fell in love with trick-riding during a camping trip when he was 16.

A keen mountain biker at the time‚ Loubser watched in awe as a rider performed a backflip.

“I’d never seen anything like that before, and I was like, I have to do this. This is what I wanted to do.”

He got his first BMX and the rest was history for the now 24-year-old‚ a sponsored rider who films his stunts.

Shapes in the City

“I don’t know why I took to it naturally … I just wanted to do it. For fun‚ not as a professional‚” said Loubser‚ whose sponsor Red Bull has just released a 29-minute internet video of his approach to tricks.

Loubser‚ who was homeschooled from grade 2 because he struggled with attention deficit hyperactivity disorder‚ grew up in the seaside village of Gansbaai‚ near Hermanus‚ from the age of eight‚ enjoying an outdoor lifestyle.

During his gap year after school he picked up a sponsorship from Red Bull and has been doing tricks since, breaking a few bones and tearing ligaments along the way.

A big element is conquering the fear when he returns to the scene where a previous attempt ended in a crash.

“The mental battles are strong, especially if it’s a spot … and I crashed really badly. Then coming back to that spot I know what happened before‚ I still want to do the trick and you have to push through that and be like‚ ‘I’m not going to fall this time‚ I’m going to land it.’

“You learn to push the fear aside and believe in yourself. You’ve got to overcome it. If you’re scared when you’re doing it you always fall.”

Trick-riding is set to become an Olympic sport at the Tokyo Games in 2021 under the name of BMX Freestyle.

Loubser describes that as BMX Park‚ as opposed to his profession of BMX Street‚ which is about looking to break new ground rather than perfecting predetermined tricks.

“Often I rely on the spot to help me do something different‚” said Loubser, who has competed with success occasionally.

“So I see something someone would never normally ride, and I go, ‘You can actually ride this’.”

The importance of off-bike training

Devlin Brown at the water cooler: Will the 80/20 diet help me become fitter and lose weight?