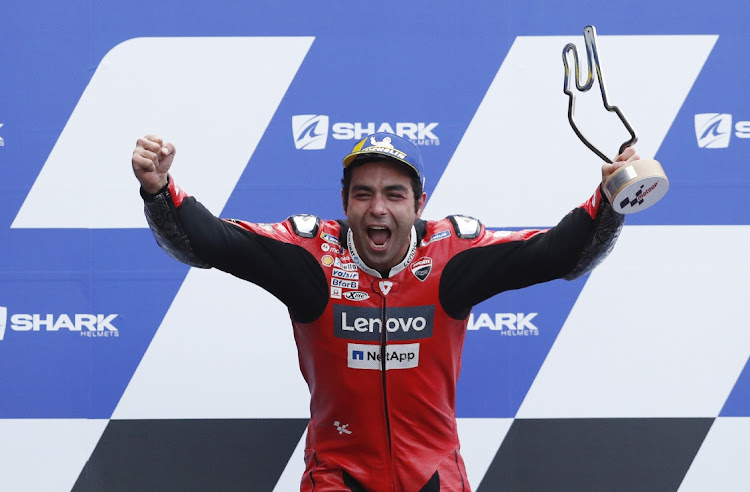 The race was delayed by a heavy downpour just moments before the start at Bugatti Circuit and changed the fortunes of championship contenders Fabio Quartararo and Joan Mir, who had never started a wet race before.

Pole-sitter Quartararo struggled on his Petronas Yamaha from the start, allowing Petrucci, who started third, to take the early lead as he went on to clinch his first victory of the season.

Petrucci’s win comes as a huge surprise after having failed to record a top-six finish in any of the previous eight races this season.

“It’s unbelievable,” he said. “I had a good feeling on dry conditions early morning but maybe I can do it even in the rain. This victory is for all the people who believed in me in these difficult times.”

In the absence of injured world champion Marc Marquez, younger brother and teammate Alex produced a string of blistering laps in his first wet race to finish second.

“After starting from 18th, it was not easy on the opening lap,” said Alex, who gave Honda its first podium of 2020. “We had the bike to fight for a win but I’m really happy with this result.”

KTM’s Pol Espargaro made a late charge to claim the final podium position ahead of Ducati’s Andrea Dovizioso.

A crash for Yamaha’s Valentino Rossi on the opening lap meant he has now failed to finish in each of the past three races. Alex Rins was second on his Suzuki when he suffered a crash with seven laps to go, while Australian Jack Miller’s charge for a top-three finish came to a cruel end with a mechanical failure in his Ducati.

Despite finishing ninth in his home race, Quartararo extended his lead in the championship standings to 10 points over nearest challenger Mir, who finished 11th.

The MotoGP will return to Spain with the Aragon Grand Prix on October 18.

Marc Marquez to miss another MotoGP

Marc Marquez to miss another MotoGP