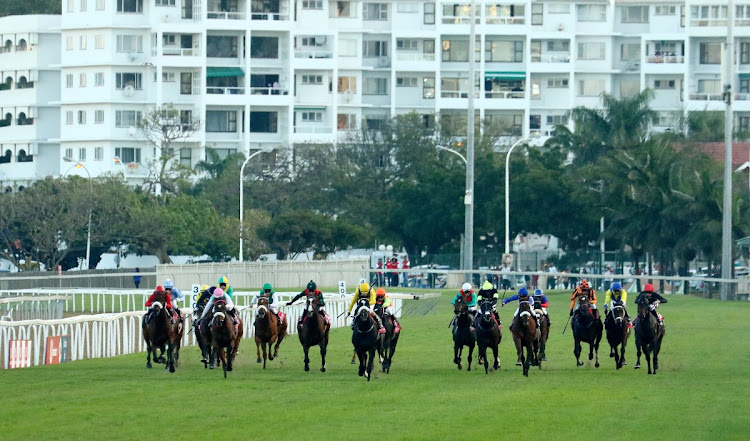 Riders jostle for position during a race at the Greyville Racecourse in Durban. Picture: GALLO IMAGES/ANESH DEBIKY

Two female trainers — Candice Dawson and Dorrie Sham — have sound prospects of winning two legs of the Pick 6 at the Vaal on Tuesday.

Dawson, who saddled 36 winners last season, ended the 2019/2020 campaign on a high when the filly Sentbydestiny provided the Randjiesfontein trainer with her first grade 1 success at Greyville at the end of August.

Sham’s decision to move from the Eastern Cape to the highveld has paid off and one of her early wins came with her sprinter Pinnacle Peak, who won the grade 3 Man O’War Sprint at Turffontein in 2018.

The first of these two women’s runners is Sham’s three-year-old Bingwa, who looks certain to start hot favourite in the fifth race. A three-year-old son of Pathfork, Bingwa has finished second in his last two outings and looks ready to leave the maiden ranks. The gelding is the only ride at the meeting for jockey Callan Murray.

While he seems to get the majority of the plum mounts for Mike de Kock, Murray is battling to get support from other trainers. That is a surprise, as he is unquestionably a talented rider.

In the eighth race, Candice Dawson has two strings to her bow with Gavin Lerena booked for the mare Eskimo Kisses and champion jockey Warren Kennedy partnering the four-year-old filly Stellar Motion.

In both cases it is a question of the jockey being reunited with a horse they have won on. Lerena has won twice on the daughter of What A Winter in 2020 while Kennedy scored on Stellar Motion at Turffontein in July 2019.

As Stellar Motion has not been seen in action since March, it may be safer to row in with Eskimo Kisses, who is a speedy sort and should go well from a favourable draw.

Though Sheer Talent is bidding for a four-timer, Paul Matchett’s filly has risen sharply in the weights and a bigger danger to Eskimo Kisses could be Lyle Hewitson’s mount Before The Dawn.

Trained by another female trainer, Ashley Fortune, Before The Dawn, a R250,000 daughter of Oratorio, has more than earned her keep in 2020. Her last six races have yielded two wins and three placings.

Apprentice Philasande Mxoli is good value with his 4kg apprentice allowance and his claim will reduce Ulla’s weight to 55.5kg. Off this mark, it would be no surprise if Stuart Pettigrew’s filly took a hand in the finish.

Whatever his fate on Eskimo Kisses, Lerena will be expecting to win the sixth race on trainer Fabian Habib’s runner Palace Green. The Twice Over gelding, who has proved he stays 2,400m, was beaten by Barak last time out and that horse scored again for trainer De Kock at Turffontein last weekend.

The right horse for the swinger with Palace Green could be another of apprentice Mxoli’s mounts, French Leave. Now in the care of Jannie Borman, the five-year-old bumped a top sort in Dance Class last time out.

There may be some raised eyebrows about the selection of Our Biscuit for the seventh race, but the six-year-old looks worth an each-way punt at her early odds of 20-1.

Our Biscuit goes well for young Jeffrey Syster and his claim will reduce the mare’s weight to 50.5kg. The apprentice will have to overcome a wide draw, but the race is further than 2,000m so this should not prove too much of a problem.

Other horses who need including in jackpot and Pick 6 perms are recent Turffontein winner Pink, the consistent Sammi Moosa and Marco van Rensburg’s mount The Sash.

When it comes to hard work, the popular jockey gets full marks with 116 races in the first six weeks of the new campaign
Sport
9 months ago

The breeder won a number of categories, including horse of the year, at the Equus awards
Sport
9 months ago
Next Article

Bruss sides with Hawwaam for horse of the year

Bruss sides with Hawwaam for horse of the year