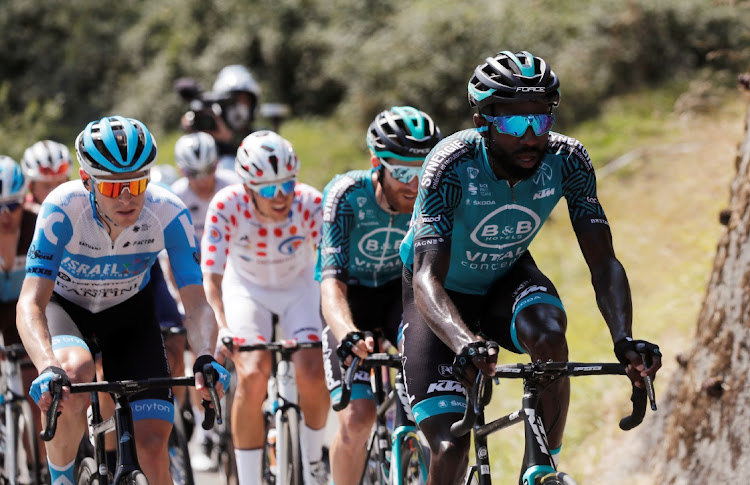 Kevin Reza in action ahead of other riders. Picture: REUTERS/BENOIT TESSIER

Lyon — After years of keeping quiet on the matter, Kevin Reza, the only black rider in the Tour de France peloton this year, says he is ready to make his voice heard amid the Black Lives Matter (BLM) movement.

The 32-year-old, who turned professional in 2011 and rides for French outfit B&B Vital Concept, would like his peers to express support for the BLM movement but with professional cycling being largely an all-white business, Reza is on his own.

“It’s a shame. You can see the big names in sport giving themselves the means to speak, to make noise, to show their solidarity with this movement,” Reza, who was born on the outskirts of Paris to a family that originated from the French overseas region of Guadeloupe, told Reuters.

“I’m Kevin Reza, I don’t carry as much weight in world sport as Lewis Hamilton in Formula One or LeBron James in the NBA.”

Reza, however, believes he can make a difference.

“I’m thinking about putting things in place, about being able to show my support for this movement. It’s not always easy and it’s tricky to go headlong and not think about exactly what you want to do,” he explained. “But that doesn’t mean that I don’t support this movement.”

While he does not believe the professional peloton to be racist, Reza said he has suffered racism while racing. In 2014, he accused Michael Albasini of using a racial slur during a Tour de France stage. The Swiss said he had been misunderstood. That day, Reza was backed by his team manager, Jean-Rene Bernaudeau.

“I do not tolerate racism ... it’s unacceptable, unacceptable,” Bernaudeau, who helped several black riders turn professional, said at the time.

“I got Albasini on the phone. I told him what I thought of his attitude.”

Reza still has vivid memories of that day.

“He’s [Bernaudeau] a manager with a big heart who never lets his riders down. He’s someone I respect a lot and that I just don’t forget,” Reza said. “I trusted him completely on this, I knew he was going to fight for me.”

The same year, he featured on a “Black, White, Beur (Arab)” French championships podium with Arnaud Demare and Nacer Bouhanni.

“Some people were clearly not happy with that podium,” said Reza, 24 at the time. He did not specify who was unhappy at the diverse winners’ podium. “At the time it was too hard for me to fight on my own because I was much younger,” he said.

“I was really focused on my Tour de France, I didn’t want to spread myself too thin and maybe I wasn’t too aware of what was going on around me, of the noise it was going to make.”

Things are different now. “But looking back, today I’m 32, I have 10 years of career behind me, so I feel really free and ready to fight and move forward,” said Reza.

Prevails over triple world champion Peter Sagan, who was relegated to last place, in a tightly contested sprint to win the 11th stage
Sport
10 months ago