Trainer says odds on his horse for the Gold Cup should be around 6-1, and not 12-1 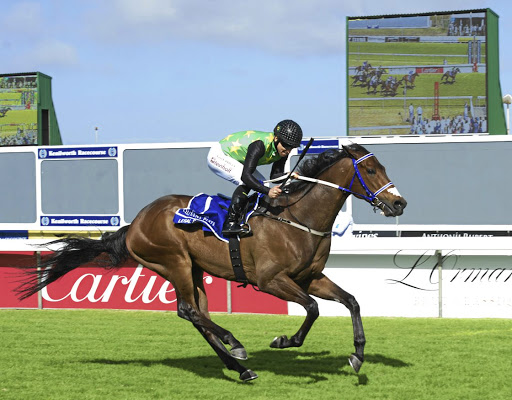 Bookies are taking a chance offering Imperial Ruby at 12-1 for Saturday's WSB Gold Cup at Hollywoodbets Greyville, according to the four-year-old's trainer Corné Spies.

In an interview with Business Day on Tuesday, Spies, who celebrates his 50th birthday in September, said: “To me that price is a gift — of course you can never say a horse will definitely win any race but I thought he might be around 6-1.

“If things go our way, I feel he has to be right there; we've got Striker [Piere Strydom] back in the saddle and we're better off at the weights with a number of runners compared to the Gold Vase,” said Spies.

“If you look at the film of the Gold Vase, you'll see he got closed up at a crucial point about 350m out. After that happens horses usually have nothing left and go out of the back door, but he still rallied back to finish not far off the winner.”

After the Vase, Imperial Ruby travelled back to Spies's Vaal base and he feels the gelding will have no problem handling the return journey.

What he is surprised about is that he managed to buy the son of Silvano for R50,000 at the 2018 National Yearling Sale.

“I can only think someone was sleeping — his grandam was Champion Two-Year-Old Filly in Ireland in 2003.”

Spies, whose father Tobie won the 3,200m Caradoc Gold Cup with Northern Flame, saddled his first winner, Heraldic Seal, in 2008. Since then he has had some top horses through his hands, including Rock Opera and War Horse whom Jeff Lloyd piloted to victory in the grade 1 Golden Horseshoe on July day in 2012.

It's My Turn, winner of the Gold Cup in 2018, remains favourite for Saturday's race as a result of his excellent fifth behind Belgarion in the Vodacom July.

“Yes, his July run was a good one, but he's now eight years old and — at his current price — I'll be taking him on. Our price about Imperial Ruby is 10-1,” said Gauteng bookmaker Lance Michael.

The beauty about Saturday's marathon race is that — in betting terms — it is similar to the Grand National in the UK. A punter can get 33-1 or 40-1 about a long shot they fancy.

My two long shots are Lucinda Woodruff's stayer Dharma and Sean Tarry's representative Shenanigans. Woodruff is in KwaZulu-Natal putting the finishing touches to Dharma's preparation and I feel Shenanigans, the mount of Lyle Hewitson, could run a place.

While Shenanigans has recouped the R500,000 he cost owner Chris van Niekerk as a yearling, he has been largely disappointing in the past nine months. He finished 12 lengths behind Imperial Ruby in the Gold Bowl at Turffontein in June so Spies's runner should have his measure once again.

However, Shenanigans hinted he might be returning to form when finishing sixth — beaten by only two lengths — behind Dynasty's Blossom in the recent Gold Vase.

Flichity By Farr, a Go Deputy mare trained by Alyson Wright, is also worth considering for the quartet which always reaches a big amount on major race days. The six-year-old has been a profitable buy for the Fire Racing Trust. She cost R310,000 as a yearling and has earned more than R900,000.

With four grade 1 races and the 100th running of the Gold Cup, it is a connoisseur's meeting on Saturday and the Pick 6 pool is estimated to reach R8m.

25-1 Dharma, Sunshine Silk, Out Of Your League

Locals hope Art Power can down Battaash in York sprint

It will be a tough few days for Yorkshire racing fans, but the country’s top horses will still be in action.
Sport
9 months ago
Next Article

Well-bred Oscar Wilde ready for next chapter in his career

Former top Zim trainer aims to strike at the Vaal

Well-bred Oscar Wilde ready for next chapter in his career

Former top Zim trainer aims to strike at the Vaal